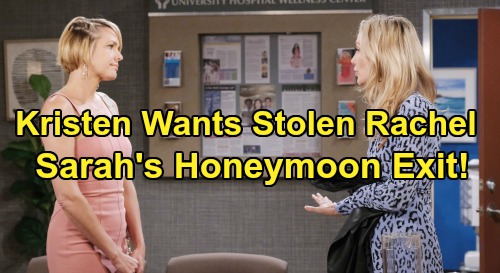 Days of Our Lives (DOOL) spoilers tease that Kristen DiMera (Stacy Haiduk) will get some news that leaves her overwhelmed, overjoyed and absolutely furious! Kristen’s sure to face a flood of complex emotions when she realizes her beloved daughter is still alive.

DOOL fans have watched Kristen mourn for Rachel DiMera Black, but Rachel’s been right under Kristen’s nose the entire time. Thanks to Xander Kiriakis (Paul Telfer) and Victor Kiriakis’ (Paul Telfer) twisted plan, Rachel was swapped with Mickey that fateful Mother’s Day. Kristen’s been stuck in grief ever since, but her world’s about to change drastically.

Brady won’t be with Kristen when this shocker comes out, so that’ll leave him with the task of revealing it to Rachel’s mom. On April 14, Days of Our Lives spoilers say Kristen will finally learn Rachel is alive! She’ll be floored and relieved by the baby switch, but she’ll also wonder how something like this could’ve happened.

Once Brady brings Kristen in the loop on Xander and Victor’s devious plot, she’ll fume over how low they were willing to go. However, there’ll be time to deal with Victor and Xander later. Days of Our Lives spoilers say Kristen will want to see her daughter first. Kristen will be desperate to hold Rachel in her arms again and bond with her as a mother.

The trouble is Rachel may be missing by then! Days of Our Lives spoilers say Sarah will make a shocking decision after she gets updates on Mickey’s true identity. Although Sarah will carry out a wedding charade and make Xander pay, it’s Sarah’s next move that’ll leave everyone reeling when she flees Salem with Mickey!

DOOL viewers will recall that the Titan jet’s ready and waiting for Xander’s honeymoon with Sarah. Xander suggested Sarah could head for Paris, The Caribbean or any other destination of her choosing.

Sarah will be free to hop on that jet with Mickey and make up some excuse to the pilot about Xander catching a later flight. Xander has inadvertently created a simple exit strategy for Sarah and the baby.

Days of Our Lives spoilers hint that Kristen may be in for another round of shocking news. When she shows up to take her daughter back, Kristen should realize Rachel’s vanished with Sarah!

The excitement’s about to rev up on the NBC soap, so stay tuned. Are you looking forward to the aftermath of the baby swap reveal? CDL will have all the hottest Days of Our Lives spoilers, updates and news, so be sure to stop by often.