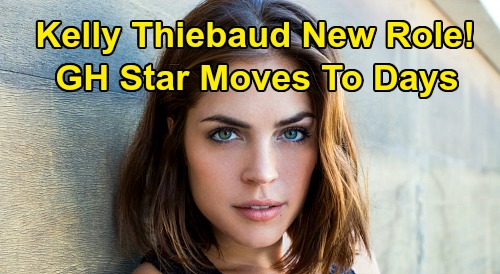 Days of Our Lives (DOOL) spoilers tease that a new character will debut, but she’ll be played by a face that’s familiar to many soap fans. If you’re a DOOL viewer who watches General Hospital as well, you know Kelly Thiebaud as Britt Westbourne in Port Charles. Thiebaud also played Alicia on Days in 2011, but now she’s returning to the NBC soap in a brand-new role.

According to Soap Opera Digest, Thiebaud will first appear as Zoey during the week of April 13-17. It turns out Zoey is the attorney representing Evan Frears aka Christian Maddox (Brock Kelly). Days of Our Lives spoilers say Zoey’s a real shark! Orpheus (George DelHoyo) will be counting on this hotshot lawyer to get Evan off the hook for Jordan Ridgeway’s (Chrishell Stause) murder.

Days of Our Lives spoilers say Zoey will have a tense confrontation with Rafe Hernandez (Galen Gering) in the week ahead. DOOL fans can expect Rafe to get some stunning news regarding Evan’s case. Zoey will hand over a form and leave Rafe fuming, so you can bet these updates won’t be positive ones – not to Rafe anyway!

Rafe wants to see Evan locked up for his crimes, but Zoey stands a real chance of clearing Evan’s name. Days of Our Lives showed us that Evan’s guilty through flashbacks, but that doesn’t mean it can be proven. Evan’s confession was already thrown out and the other evidence may not hold up in court.

After all, Ben Weston’s (Robert Scott Wilson) conviction muddied the waters and could make it easier for Zoey to get Evan out of his jam. Even though Ben’s conviction was overturned, Zoey can still argue that the case was a disaster from day one. The whole thing was mishandled, so Zoey may act like there’ll be no path to justice here.

Whatever the case, those of us who like both GH and Days should enjoy seeing Thiebaud take on another role. Days of Our Lives spoilers say Zoey will make quite a splash from the get-go, so don’t miss what’s in store.

Are you looking forward to Kelly Thiebaud’s debut as Zoey? CDL will have other scorching Days of Our Lives spoilers, updates and news posts, so be sure to check back again soon.