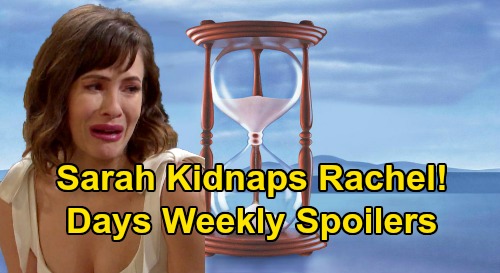 Days of Our Lives (DOOL) spoilers for the week of April 13-17 tease that some shockers will strike Salem. First, Brady Black (Eric Martsolf) will reel as Nicole Walker (Arianne Zucker) and Eric Brady (Greg Vaughan) tell him the stunning truth about Mackenzie “Mickey” Horton. Once Brady’s brought up to speed on the baby swap, he’ll be eager to find Kristen DiMera (Stacy Haiduk) and spread the news.

It won’t be long until Kristen learns Rachel DiMera Black survived and was switched with Mickey on Mother’s Day. DOOL fans can expect some emotional moments as Brady and Kristen deal with these wild updates. They never thought they’d see their daughter again, so there’ll certainly be relief and joy in these scenes.

At the same time, Kristen and Brady will be absolutely furious. They’ll plan to put both Xander Kiriakis (Paul Telfer) and Victor Kiriakis (John Aniston) on the hot seat soon enough. Until then, Sarah Horton (Linsey Godfrey) will pretend Xander’s dream is coming true. All Xander wants is a life with Sarah and Mickey, so he’ll be thrilled as his nuptials get underway.

However, things will take a dark turn as Sarah unleashes her wrath. The wedding ceremony will be interrupted by Sarah’s meltdown, which will be followed by Eric’s. Days spoilers say Eric will rip into Xander for causing so much pain. Eric will undoubtedly point out that Xander set Sarah up for a heartbreaking goodbye with Mickey.

Of course, Sarah won’t want to say that goodbye if she doesn’t have to! DOOL spoilers hint that after a weird encounter with Sonny Kiriakis (Freddie Smith) and Will Horton (Chandler Massey), Sarah will make a shocking choice. That choice will likely be to board the Titan jet and head for parts unknown. It appears Sarah will make a desperate getaway with Mickey – the desperate ex-mom will kidnap Rachel!

Other Days of Our Lives spoilers say Will and Sonny will mull over a family expansion. They discussed this idea before the prison separation, but now’s a good time to revisit the topic. There’s a good chance Will and Sonny will still be on the same page about adding a child.

Sadly, Justin’s destined to lose sooner or later. He can’t compete with all the history between Steve and “Sweetness,” so Kayla’s bound to choose that old connection over her new one. It’ll take some time, but a “Stayla” reunion will indeed happen.

Elsewhere, Days spoilers say Hope Brady (Kristian Alfonso) will remain distraught over her actions as Princess Gina Von Amberg. Hope wasn’t in control of her mind and body during all that chaos, but she’ll still feel guilty. As Hope reflects on the messes she made, she’ll need the support of her loved ones.

Next, Evan Frears aka Christian Maddox’s (Brock Kelly) lawyer will show up with jaw-dropping info for Rafe Hernandez (Galen Gering). Zoey (Kelly Thiebaud) is the attorney who’s representing Evan, who agreed to a joint legal defense with Orpheus (George DelHoyo). It turns out Zoey is also Evan’s sister, so stay tuned for more DOOL drama.

Later, Rafe and Orpheus will have a major showdown over David Ridgeway (Caleb and Kyler Ends). As for Ben Weston (Robert Scott), he’ll clutch Evan by the throat and threaten to strangle him. Ben can’t forgive Evan for murdering Jordan Ridgeway (Chrishell Stause) and letting Ben take the fall, so his anger will continue to boil over.