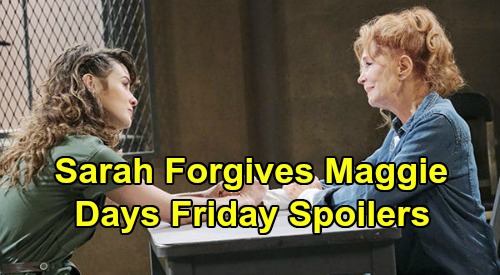 Days of Our Lives (DOOL) spoilers for Friday, May 15, tease that Brady Black (Eric Martsolf) will be down in the dumps as he heads back home. After saying that emotional goodbye to Kristen DiMera (Stacy Haiduk) and Rachel Black, Brady will be facing a lonely new beginning. He’ll end up stopping by Eric Brady (Greg Vaughan) and Nicole Walker’s (Arianne Zucker) place to fill them in on everything that went down in Paris.

Unfortunately, Eric won’t agree that Brady made the right call. When Eric realizes Brady let Kristen flee with Rachel, he’ll blast his brother. Eric will likely feel like this is unfair to the people who loved Rachel as “Mickey” – especially Sarah Horton (Linsey Godfrey). Now Rachel’s gone and can’t have any kind of relationship with her fill-in parents.

However, Brady just couldn’t stand the idea of separating Kristen and Rachel. Kristen wanted a child so desperately that Brady refused to take this one away from her. While Eric tries to accept that, Sarah will pay Maggie Kiriakis (Suzanne Rogers) a visit at Statesville. Days spoilers say Sarah will be there to offer Maggie something surprising: forgiveness.

When it comes down to it, Sarah needs her mom. Shutting Maggie out and holding a grudge would only cause more pain, so Sarah will be ready to forgive and move on. It’s time for Sarah to start building a new life for herself without “Mickey,” so letting go of her anger toward Maggie will be an important first step.

Days of Our Lives spoilers say Maggie will appreciate Sarah’s compassion, but it won’t change the guilt she’s battling. Maggie thinks she killed Adrienne Kiriakis (Judi Evans) and the real Mickey, so she’ll want to leave this world behind.

Victor Kiriakis (John Aniston) will get updates on Maggie’s suicide plans through letter that arrives at the hospital. It’ll leave Victor worried that Maggie could actually succeed in killing herself, so he’ll send Xander Kiriakis (Paul Telfer) rushing over to Statesville by the time Monday rolls around.

In the meantime, Orpheus (George DelHoyo) will taunt Marlena Evans (Deidre Hall) and rip the cord out of her phone. Days spoilers say Orpheus will want Marlena’s undivided attention as he delivers some terrible news.

It looks like Orpheus has already kidnapped John Black (Drake Hogestyn), so it looks like he’ll bring Marlena in the loop and present his demands.

Orpheus roped Evan Frears aka Christian Maddox (Brock Kelly) into a sneaky plan, which led to drugged Maggie being framed for the deadly crash.

DOOL has some fantastic scenes on the way, so don’t miss all the action! CDL’s a great place to visit for exciting Days of Our Lives spoilers, updates and news.