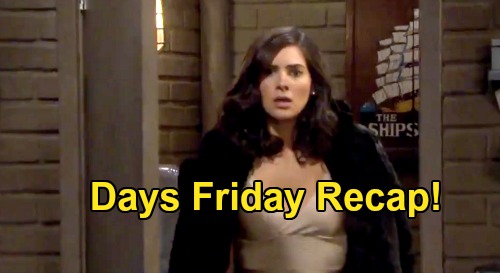 Days of Our Lives (DOOL) spoilers recap for Friday, November 27, reveal that Jack Deveraux (Matthew Ashford) and JJ Deveraux (Casey Moss) were in the Brady Pub when Abigail DiMera (Marci Miller) walked in.

Abigail asked if Jack still didn’t want anything to do with her, and she said that she shouldn’t have brought the letter to the anniversary party. JJ stepped out to call Theo Carver (Cameron Johnson), and Abigail apologized to Jack for how she handled the situation after finding the letter.

Jack then apologized, saying that his actions would have caused Jennifer Deveraux (Cady McClain) pain regardless of how Abigail handled the situation. “This is all on me and no one else,” Jack said.

Jack said that the forgave Abigail, and he wondered if Abigail could forgive him and stop beating herself up for what she did. Abigail and Jack hugged tenderly, and JJ walked back in, happy to see the hug.

JJ announced that he had to go back to South Africa immediately for a business emergency, and Jack told his kids that despite everything that had happened, they had the best family ever. Jack, JJ, and Abigail shared a group hug.

Over at the Horton house, Julie Williams (Susan Seaforth Hayes) talked with Jennifer, apologizing for asking Jack to stay for Thanksgiving dinner earlier. Julie said that despite what Jack did, her heart went out to him, and that Jack loves Jennifer very much.

Jennifer said that she didn’t know if she could forgive Jack for sleeping with Kate DiMera (Lauren Koslow) and then lying about it. “I feel like I can’t trust him ever again,” Jennifer said.

Later, JJ showed up and told Jennifer about needing to return to South Africa. JJ told Jennifer that he took a slice of the pie that she made to Jack and that he was grateful. JJ repeated Jack’s words about them having the best family, and JJ and Jennifer hugged tenderly.

In the park, Rafe Hernandez (Galen Gering) bumped into Roman Brady (Josh Taylor), who wanted to know what Rafe was doing back in Salem. Rafe said that he was back in town where he belonged, and that he was headed over to Hope Brady’s (Kristian Alfonso) house.

Roman told Rafe everything that had happened with Ciara Weston (Victoria Konefal) possibly being shot by Vincent Bellman (Michael Teh), and how Hope went off to chase leads on her daughter.

Rafe was horrified by the news about Ciara, and he lamented that he should have stayed to help Hope. Rafe said that the men who were after his family were now behind bars, so he was home to stay, and he was dismayed to learn that no one knew where Hope was or when she’d be back.

Chad and Gabi immediately started bickering, and Chad once again accused Gabi of drugging Abigail. Gabi pointed out that she didn’t do it, and that the person who did drug Abigail was still out there. Just then, Gwen Rizczech (Emily O’Brien) walked into the room.

Chad explained that Gwen was now the nanny, and that prompted some snarky remarks from Gabi. Gabi asked where Jake Lambert (Brandon Barash) was, and Gwen said she wouldn’t be surprised if Jake had moved on, and that Gabi only used Jake to make inroads at DiMera Enterprises. Gabi said that wasn’t true, and she and Gwen traded insults some more.

Gabi learned that Jake was likely in his workshop, so she rushed off, and shortly thereafter Abigail walked in the room. Chad told Abigail that Gabi was back, which upset Abigail.

Meanwhile, over in Jake’s workshop, Kate told Jake that she had a rather sad Thanksgiving. Jake urged Kate to open up to him about what was wrong, and Kate launched into the story about her granddaughter Allie Horton’s (Lindsay Arnold) current situation.

Jake learned that Allie’s baby was the product of a rape, and he comforted Kate, telling her that her love would help Allie get through this. Kate was touched, and it wasn’t long before Jake and Kate were back in bed together. Soon, Gabi opened the door to the workshop and gazed in, getting an eyeful of Kate and Jake in bed laughing and carrying on.

That was a terrific episode of Days of Our Lives and a great way to round out the week! Stick with the NBC soap and don’t forget to check back with CDL regularly for the latest Days of Our Lives spoilers, daily episode recaps, and news. We’re your go-to source for all the soaps!