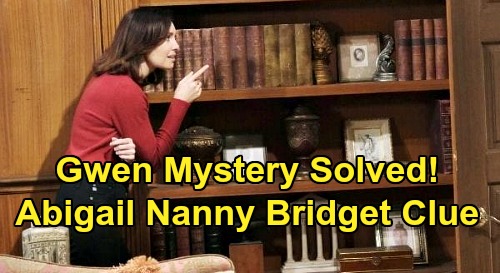 Once Abigail’s been brought down, that’s when Gwen will reveal to Abigail and everyone else exactly who destroyed her. Days of Our Lives spoilers say Gwen’s counting on a shocker and a satisfying conclusion.

It’s possible Gwen is Jack Deveraux’s (Matthew Ashford) long-lost daughter, but what if she’s someone else’s long-lost relative instead?

We may have finally cracked the case of Gwen and her mysterious agenda. The answer just might be buried in a forgettable Days storyline from 2015 – one that could become incredibly important now.

On July 17, 2015, Stefano DiMera (Joseph Mascolo) came clean to Chad DiMera (Billy Flynn) about why he wanted his son to marry Abigail. Chad found out Abby was set to inherit a piece of land that was worth a fortune.

Abigail’s old nanny, Bridget, was quite fond of Abby and her mother, Jennifer Deveraux (Melissa Reeves), back when they lived in Ireland. Bridget took care of Abigail when she was child and made her the sole heir to this land she owned.

Let’s look at some revealing dialogue to explain a bit more.

“So she’s inheriting a fortune from her babysitter?” Chad asked his father at the time. “Well, I mean, the woman thought of her as a daughter, for goodness’ sake,” Stefano replied.

This wasn’t just a small fortune either! Stefano told Chad his inheritance was capable of insuring their family’s destiny.

For a man as wealthy as Stefano to say something like that, you know this land had to be a HUGE deal. There was also talk about Bridget’s time with Abigail and Jennifer being the happiest of her life.

Bridget treasured Abigail’s letters and pictures that she’d kept, so Abby was truly the most special person Bridget could think of to leave this land to.

That brings us to Gwen, who’s just offered to be a NANNY to Abigail’s children.

Between that DOOL hint and Gwen’s accent, we’ve got some good reasons to think Gwen was connected to Bridget somehow. Perhaps Gwen feels dear old Bridget’s land should’ve gone to her, not Abigail.

It was implied that Bridget was elderly, so Gwen may be a granddaughter rather than a daughter.

Maybe Gwen’s mother was given up for adoption. It would explain why Abigail was sort of a fill-in daughter for Bridget – a do-over and the heir who took what should’ve gone to Gwen.

Now Gwen’s setting out to take what’s valuable to Abigail: her husband, kids, home, etc. This revenge mission is starting to make sense! We’ll give you updates as other Days news becomes available.