BY hellodrdavis on March 23, 2020 | Comments: one comment
Related : Days of Our Lives, Soap Opera, Spoiler, Television 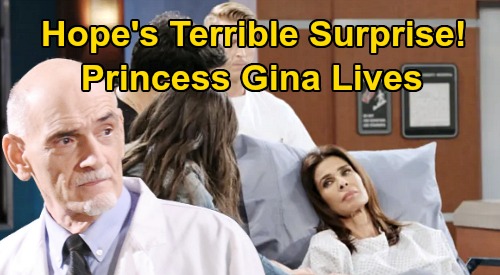 Days of Our Lives (DOOL) spoilers tease that Hope Brady (Kristian Alfonso) will be in for some scary times ahead. As DOOL viewers know, she recently woke up in University Hospital, only to be told that she has been absent for over a year and that Princess Gina Von Amberg’s “essence” had taken over her body.

It was a terrible blow for Hope, and she’s currently in the process of trying to comprehend all of the terrible things Princess Gina did while inhabiting her body.

It certainly came as a shock to Hope that she pushed her best friend Jennifer Deveraux (Melissa Reeves) over a balcony and sent her into a coma for a year. And Hope was devastated to learn about how she had brought Stefano DiMera aka Steve Johnson (Stephen Nichols) back to cause havoc for everyone.

Hope can’t help but feel responsible in her heart, even though intellectually she knows that she wasn’t in control at the time.

Well, according to Days of Our Lives spoilers, Hope will soon experience some terrible occurrences. She’ll have nightmares about Princess Gina which will terrify her.

Of course, this could be the result of Hope’s fears running wild – after all, she’s coming to terms with the fact that Princess Gina interacted with her children as her for over a year and took over her life completely.

But could there be something else going on here? DOOL viewers will remember that right before Princess Gina was taken into surgery to have the microchip removed, she begged Dr. Wilhelm Rolf (William Utay) to merely pretend to remove the microchip and leave her intact as Princess Gina.

Now, there’s always the chance that Rolf complied with Princess Gina’s request, but it seems that all Kayla Brady (Mary Beth Evans) would need to do is run another scan and find the microchip still in place, so it’s doubtful that Rolf would have risked that.

Still, given that Rolf’s work is constantly evolving and is never an exact science, you never know what he might have done during the surgery in lieu of leaving the chip there.

Rolf could have done something to leave some of Princess Gina’s “essence” behind, which could explain why Hope would have nightmares about her. That certainly sounds like something Rolf would do, especially since he can’t stand Hope and blames her for shooing Stefano DiMera (then played by Joseph Mascolo) years ago.

We’ll see what happens here, but it looks like Hope is going to have difficulty bouncing back from this horrible experience, which seems completely normal, given that someone overtook her body for over a year. Time will tell what Rolf actually did, and whether he totally removed Princess Gina from Hope’s psyche.

Do you think there’s a chance that parts of Princess Gina remain in Hope’s brain? Stick with the NBC soap and we’ll keep you informed as more DOOL news comes in. You can trust CDL for the latest Days of Our Lives updates and spoilers, so check in with us often.