Days of Our Lives Spoilers: Is Gabi DiMera The Strongest Woman On Soaps? – Camila Banus Stands Out 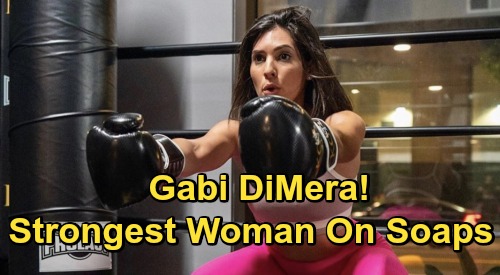 Days of Our Lives (DOOL) spoilers tease that Gabi DiMera (Camila Banus) has been pretty fierce lately. As DOOL viewers know, Gabi is currently 100% sure that Jake Lambert (Brandon Barash) is actually Stefan DiMera (Brandon Barash), and she’s going to go to great lengths to prove it. In fact, mere hours after getting out of jail on bond for allegedly drugging Abigail DiMera (Kate Mansi), Gabi was off collecting samples for a DNA test for Jake.

Of course, part of the reason why the “Stabi” pairing was so popular was because Gabi was so fierce in her love for Stefan. What started out as an aggressive ploy to get revenge on Stefan and take him for everything he was worth turned into a serious love story and one of the most popular soap couple pairings of its time. And now that Jake is on the scene with obvious chemistry with Gabi, fans are thrilled, and they want Gabi to go after her man with full force.

Well, even though Gabi has had some setbacks recently in her quest to prove Jake is Stefan, she’s really held her own. After all, she’s got someone plotting against her and she’s not quite sure who that person is.

Someone drugged Abigail with a powerful hallucinogen before Wilhelm Rolf (William Utay) stepped up and effectively framed Gabi for the crime. But Gabi doesn’t seem scared of this unknown person working against her.

In fact, if anything, the whole thing has made Gabi more determined to beat the charges against her and prevail over whoever this enemy is. And then there was the whole situation when Gabi sought revenge against Lani Price (Sal Stowers) for accidentally shooting Stefan.

Gabi went after Lani with a vengeance, even going to such extremes as blackmailing Lani for a full year and getting her to dump Eli Grant (Lamon Archey) at the altar.

And we can’t forget how Gabi bounced back after her prison stint, when Stefan and Abigail (operating under the influence of one of her altars) framed her for Andre DiMera’s (Thaao Penghlis) murder.

Gabi had a terrible time in prison, even getting beat up and rendered unable to have more children, but still Gabi bounced back and came back stronger than ever, then choosing to get revenge on Abigail.

All this leads us to wonder…is there any other female character on soaps who is as fierce and strong as Gabriella Josephina Hernandez DiMera? Certainly, there’s no woman who’s as resilient as Gabi in the current soap landscape – she literally gets beat down and comes right back up fighting time and time again.

Setbacks don’t really faze Gabi for long at all, and she tends to come back stronger each time she bounces back.

We’ll see how Gabi gets through her latest bout of trouble, now that she’s been kidnapped by the mob guys who are after Jake. But something tells us she’ll be just find in the end, because that’s Gab!

What do you think? Is Gabi the strongest, fiercest woman on soaps right now? And just for the record, if any actor deserved an Emmy nomination, it was Camila Banus! Stay tuned to the NBC soap and be sure to keep CDL bookmarked for the latest Days of Our Lives spoilers, news, and daily recaps.