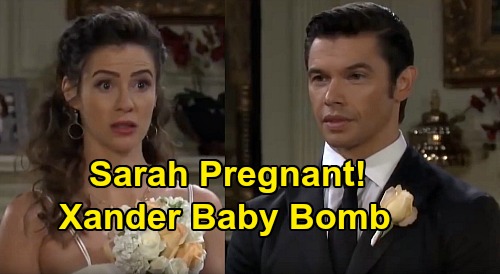 Days of Our Lives (DOOL) spoilers tease that Sarah Horton’s (Linsey Godfrey) world will be shattered by some horrible news. After Nicole Walker (Arianne Zucker) updates Eric Brady (Greg Vaughan) on the death of his baby with Sarah, she’ll explain that the real Mackenzie “Mickey” Horton was swapped with Rachel DiMera Black. Eric will face a flurry of emotions as he tries to process what this means.

Nicole will point out that she wanted Eric to know the truth, but he could always keep quiet about it. In fact, Nicole will suggest that might be the best thing Eric could do – just stay tight-lipped and raise Mickey as his own with Sarah.

First thing’s first though. DOOL fans know Sarah’s about to marry Xander Kiriakis (Paul Telfer), so she needs to be the one Eric fills in first. Once Eric and Nicole rush to stop Sarah from tying the knot with her lying fiancé, they’ll indeed catch her in time.

Days of Our Lives spoilers say Sarah will be devastated as she realizes Mickey isn’t her daughter – and Xander’s known the entire time.

It’ll take Sarah a minute to wrap her head around everything, but she’ll come to grips with the information as best as she can. From there, Days of Our Lives spoilers say Sarah will dash off for a heated confrontation with Xander.

Sarah will receive this baby switch bombshell on April 10, but Days spoilers clearly state that Sarah will head down the aisle during the week of April 13-17.

Unless DOOL has released flat-out wrong info, that means Sarah will learn the truth, plan to call Xander out and then change that plan. The question is: why? What would make Sarah wind up at the altar with Xander when she just found out something so terrible?

Since new Days of Our Lives spoilers confirm Sarah will be crushed by the baby swap news, we can rule out denial now. That’s good to know. With that in mind, Sarah may decide she wants to pull the rug out from under Xander. Since her own world was shattered, Sarah may want to shatter Xander’s world, too.

However, what if there’s a different reason why Sarah has a change of heart and lets the wedding proceed? Could Sarah have a secret of her own? Let’s consider for a moment that Sarah might be pregnant. That would explain why Sarah even agreed to this rushed wedding at all.

Sarah could’ve decided to keep quiet until after their marriage and deliver a sweet honeymoon surprise. Obviously, Sarah wasn’t planning on learning that Mickey wasn’t her kid!

After mulling it over, Sarah might determine that this is her chance to have another baby of her own and start a family with the man who’d do anything for her. Since Sarah’s losing Mickey, maybe she won’t want to lose Xander as well.

We’d still say breaking Xander’s heart at the altar is the most plausible option, but it’s wise to keep open minds about other possibilities – like the idea of Sarah being pregnant. When it comes to Days, there’s always some twist just around the corner! It’d certainly complicate things for Sarah if she’s got Xander’s bun in the oven.