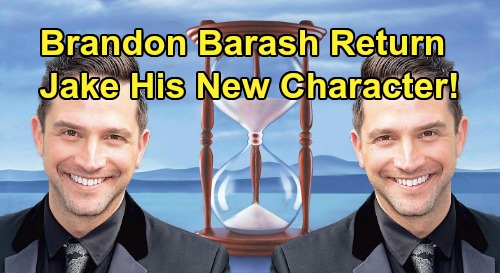 Days of Our Lives (DOOL) spoilers tease that new details are emerging about Brandon Barash’s return to the show. DOOL fans have been eager to see Barash back on their screens – and the big day’s almost here! Barash’s return airdate will be April 23, but don’t expect things to be as straightforward as Stefan DiMera returning to town.

Soon after Gabi Hernandez (Camila Banus) sees Stefan’s reflection in a store window, Ben Weston (Robert Scott Wilson) will be stunned by a familiar face. However, the mystery will deepen when Ben chats with this person. Although the man in front of Ben will look EXACTLY like Stefan, he’ll have a different name when he introduces himself.

Now you’re probably wondering what Barash’s new character name is. The answer is…Jake! During the week of April 27-May 1, Days of Our Lives spoilers say Ben will marvel at Jake’s resemblance to Stefan. Ben will think it’s truly uncanny just how much they look alike.

Of course, there has to be more to the story here. It’s doubtful Days would just bring on a character who randomly looks like Stefan. There are seemingly only two options here: Stefan is actually alive or this is a long-lost twin.

It must be one of those possibilities since Vivian Alamain (Louise Sorel) is headed back to the show – and there’s no need for her if this man isn’t her son. Nevertheless, there are some good reasons to think maybe Jake will be revealed as Stefan in the end.

For starters, there was major backlash when the show killed Stefan off. Since they went to the trouble of undoing that decision, they may not have wanted to leave anything to chance. They had no guarantee Days fans would like Barash as anyone besides Stefan, so this may actually be Stefan going by a different name.

We also know Gabi will start to sense that Stefan may still be alive. That’ll happen after that store reflection window sighting, but it should be about more than that.

Gabi and Stefan had a deep connection, so it seems Gabi may still feel that. She’ll ultimately be drawn to Jake in way that she probably wouldn’t be if he was…well, just Jake.

In a fun Twitter video that included a song, Barash also offered up some hints. His “Stefan O.” song talked about how a true DiMera never dies, so perhaps Stefan didn’t! Barash also wraps up the video with a comment that seems significant.