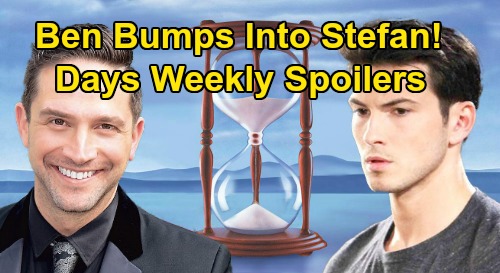 Days of Our Lives (DOOL) spoilers for the week of April 20-24 tease that we’ll see some fierce battles and stunning moments. For starters, let’s talk about Gabi Hernandez (Camila Banus) and her fight for the CEO seat. Gabi will do her best to secure the DiMera throne, which will lead to major conflict with Tony DiMera (Thaao Penghlis) and Chad DiMera (Billy Flynn).

Li Shin (Remington Hoffman) will also arrive in Salem next week. If you watched the Chad and Abby in Paris series on the DOOL app, you’ll remember Li. He’ll soon share new scenes with Gabi, Chad and Abigail DiMera (Kate Mansi), so it’ll be interesting to add Li to the mix.

As for Gabi, she’ll eventually get some good news. That could mean Gabi’s CEO lobbying will prove successful, but she’ll wish Stefan DiMera (Brandon Barash) was by her side to share in her success. Days of Our Lives spoilers say Gabi will visit Stefan’s grave as she reflects on her loss.

Later, Gabi will see what appears to be Stefan’s reflection staring back at her. She’ll struggle to believe her eyes as she gazes at a store window, but nobody will be there when Gabi turns around. Part of Gabi will feel like she’s losing her mind, but another part of her will feel like Stefan could be alive – as insane as that sounds!

Other Days of Our Lives spoilers say Ben Weston (Robert Scott Wilson) will have a startling encounter. DOOL fans can expect Barash’s character to cross paths with with two people next week. Gabi’s one – at least if seeing that reflection counts. Will Ben be the other?

Whatever the case, Stefan won’t be going by the name Stefan at this point in the story. It looks like Stefan may have amnesia, which could leave him with a completely different personality and identity.

Over with Steve Johnson (Stephen Nichols), he’ll make a painful choice. Steve will feel like he needs to let Kayla Brady (Mary Beth Evans) go, so he’ll encourage her to be with Justin Kiriakis (Wally Kurth).

As for Jennifer Deveraux (Melissa Reeves), she’ll be unnerved once Orpheus (George DelHoyo) scores his freedom. Jack Deveraux (Matthew Ashford) will console Jenn and promise to protect her, but he may have concerns as well.

Marlena Evans (Deidre Hall) will end up blasting Orpheus soon enough, so that should be fun to watch. It’s always nice when Marlena can show her fierce side! Next, Kristen DiMera (Stacy Haiduk) will go after Victor Kiriakis (John Aniston) for his role in the baby switch.

Days spoilers say Kristen will stab Victor and leave him bleeding in the Kiriakis mansion.

It won’t be long until Sonny Kiriakis (Freddie Smith) comes along and calls 911. Sonny will freak over Victor’s wound, but he’ll get him some help ASAP. While Victor’s rushed to the hospital, Kristen will face a new legal war.

Days of Our Lives spoilers say Kristen will be arrested, so Brady Black (Eric Martsolf) will have major concerns. The fate of their family will be in jeopardy!

In Paris, Sarah Horton (Linsey Godfrey) will find a nice hideout with Rachel DiMera Black. It appears Xander Kiriakis (Paul Telfer) will track Sarah down there and do his best to get her back home.

As for Chad and Abigail, they’ll have very different opinions on this whole baby swap situation. Chad will take Kristen’s side, but Abigail will think Sarah would be a far better mother.