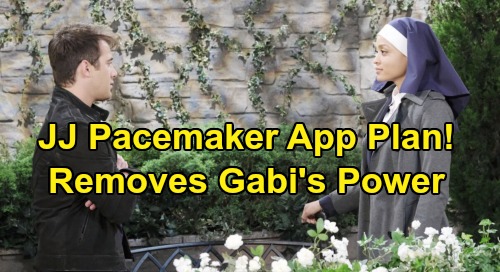 Days of Our Lives (DOOL) spoilers tease that JJ Deveraux (Casey Moss) will resolve to help Lani Price (Sal Stowers). DOOL fans know JJ was involved with Lani once upon a time. She let JJ believe she was pregnant with his baby for a while, which certainly hurt after the truth came out.

However, JJ ultimately understood that Lani wasn’t trying to cause pain. She wanted to spare JJ heartache, but she faced plenty of her own after her son with Eli Grant (Lamon Archey) died. Lani managed to heal with Eli’s support, which left them on the verge of their happily ever after until Gabi Hernandez (Camila Banus) ripped it away.

During the week of January 13-17, Lani will reveal something shocking to JJ. She’ll decide to tell JJ about the rigged pacemaker and Gabi’s deadly threat against Julie Williams (Susan Seaforth Hayes). Lani will leave JJ appalled at the lengths Gabi went to. He’ll think it’s ridiculous that Gabi would go so far to make Lani suffer.

Stefan DiMera (Brandon Barash) only has himself to blame for stepping in front of Lani’s bullet. It was his choice, and Lani did nothing wrong. Days of Our Lives spoilers say JJ will want to fix this somehow. He wasn’t Lani’s perfect match, but he believes she found one in Eli.

Since JJ couldn’t get his happy ending with Haley Chen (Thia Megia), he’ll be eager to make sure Lani still gets hers. As the first step, Days of Our Lives spoilers say JJ will arrange a meeting with Gabi. He’ll have an ulterior motive as he sets up this interaction.

Once JJ’s in the same room with Gabi, he’ll probably hope to send her out again. JJ will definitely want to cause a distraction of some sort. He’ll need to get his hands on Gabi’s phone if he wants to move to the next phase.

Days spoilers say JJ will indeed try to disable the pacemaker app – the one that could blow Julie’s heart to smithereens. JJ’s gallant efforts will put Julie at deadly risk should his efforts trigger the app.

Of course, simply succeeding would likely be far too easy. There are so many people out to get Gabi right now, so the idea of JJ simply disabling the app doesn’t seem very soapy.

JJ might get caught instead – or at least raise suspicions about what he knows. He could make Lani’s plot against Gabi even tougher, but you can bet neither one of them will give up. The same goes for Gabi’s other vengeful enemies!