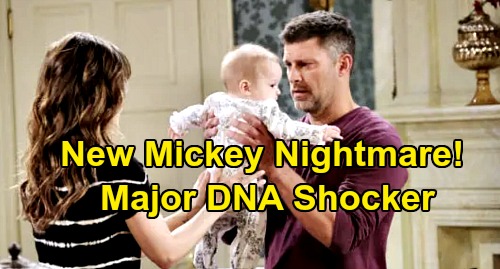 Days of Our Lives (DOOL) spoilers tease that Sarah Horton (Linsey Godfrey) and Eric Brady (Greg Vaughan) will face another round of terrible news. They were devastated to learn Mackenzie “Mickey” Horton had cancer, but they tackled the crisis as best as they could. That meant taking Mickey to Boston for treatment and trying to help her survive.

However, things may take a turn for the worse on January 17. That’s when Eric and Sarah will get hit with another crushing blow regarding Mickey. Perhaps more testing will reveal that the treatment isn’t working as well as Mickey’s doctors hoped. The results of Mickey’s next scans could prove to be a nightmare.

Of course, it’s possible there’ll be some other complication – perhaps one that’ll lead to a major DNA shocker. We should mention that Kristen DiMera (Stacy Haiduk) will talk to Brady Black (Eric Martsolf) about their baby in this same Days episode. Specifically, Kristen will want to discuss the day their daughter died.

This could naturally set up some DOOL flashbacks and suspicions. At some point, there’ll surely be a clue for Kristen or Brady to uncover. Days of Our Lives spoilers don’t confirm a baby swap just yet, but there obviously was one.

When you have two babies born at the same time and one dies under mysterious circumstances, that’s pretty much a guaranteed switch scenario.

It’ll be interesting to see who figures out the swap first. Brady and Kristen could start to wonder if everything was as it seemed, but they may worry it’s wishful thinking. Eric would probably tell the truth if he put it all together, but what about Sarah?

Sarah might keep the secret and hope she could keep raising Mickey herself. Sarah would likely confide in Xander Kiriakis (Paul Telfer) and make the mess even messier!

Whatever the case, the baby swap drama seems poised to explode soon enough. Days of Our Lives spoilers say Mickey’s next crisis could pave the way for the switch bomb to drop. It sounds like some excellent scenes are on the way, so stay tuned.

We’ll give you updates as other Days details emerge. Stick with DOOL and don’t forget to check CDL often for the latest Days of Our Lives spoilers, updates and news.