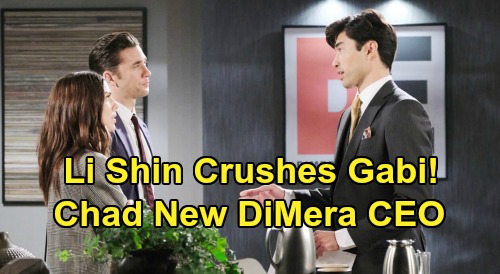 Days of Our Lives (DOOL) spoilers tease that Chad DiMera (Billy Flynn) will soon score a major victory at DiMera Enterprises. As DOOL viewers know, the DiMera family has been going through a lot lately, with the return and then departure of Stefano DiMera aka Steve Johnson (Stephen Nichols) from the scene. Stefano really put his kids through a lot, including brainwashing Chad and nearly shooting Tony DiMera (Thaao Penghlis).

But now that the Stefano situation seems to be behind them, Stefano’s children can get back to living their lives. According to DOOL spoilers, Tony and Anna DiMera (Leann Hunley) will go off canvas soon, so it doesn’t look like Tony will want a part in running DiMera Enterprises at this point. But Chad almost certainly will.

And according to Days of Our Lives Spoilers, there will be someone else who will be gunning for the top job in DiMera Enterprises, and that’s Gabi DiMera (Camila Banus). Gabi will soon go up against Chad as she lobbies for the CEO spot.

Now, Gabi has been down this road before, serving as CEO of DiMera for a considerable length of time in the past.

But then Gabi got herself in huge trouble when it came out that she had blackmailed Lani Price (Sal Stowers) by booby-trapping Julie Williams’ (Susan Seaforth Hayes) heart.

That got Gabi in all sorts of legal trouble and it got her promptly fired from DiMera Enterprises, but now that all of that is behind her, it looks like she’s going to want the position back.

Well, that’s probably not going to sit well with either Chad or Abigail DiMera (Kate Mansi), who both want Gabi as far away from the family company as possible. Still, Gabi will lobby hard for the position, and it looks like that may lead her directly to Li Shin (Remington Hoffman), son of DiMera board member Mr. Shin (Michael Hagiwara).

Li will be making his first appearance on DOOL during the week of April 20th, and DOOL spoilers say that he’ll have a big decision to make. As you might know if you watched the DOOL digital series “Chad & Abby In Paris,” Li is a high-ranking member of DiMera Enterprises in his own right, and it looks like he could have decision-making power over who becomes CEO of the company.

Days of Our Lives spoilers say that Li’s decision will concern Chad’s fate at DiMera Enterprises, and that Chad and Abigail will be celebrating their victory shortly thereafter. That certainly makes it sound like Chad might be put in the CEO position once again – much to Gabi’s chagrin.

We should note that right around the time that all of this is happening, Gabi will also be stunned to see who she thinks is Stefan DiMera (Brandon Barash), as a character currently named “Jake” (Brandon Barash) comes onto the Salem scene.

Chances are, Jake is going to leave Gabi totally discombobulated and may take her attention far away from the CEO race, which is probably a good thing, since it looks like Chad’s gong be victorious there.

Of course, if Jake does end up being Stefan in the end, then Chad will probably have yet another battle for the CEO spot, because when and if Stefan returns, he’s going to want that job back for sure! But in the meantime, it looks like it will be Chad at the helm of DiMera Enterprises.

Stay tuned to the NBC soap and keep CDL at the ready for all the hot Days of Our Lives spoilers and updates. We’ll keep you posted on the newest DOOL news as well!