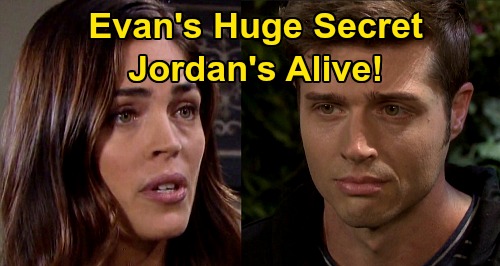 Days of Our Lives (DOOL) spoilers tease that Evan Frears aka Christian Maddox (Brock Kelly) will soon have a tale to tell. As DOOL viewers know, Evan has been causing all sorts of trouble since he came to Salem. In fact, his first appearance on the Salem scene, which was shown in flashbacks, was when he confronted Jordan Ridgeway (Chrishell Stause) and strangled her with her own scarf.

Evan then stuck around Salem and got to know his own son, David Ridgeway (Caleb and Kyler Ends), by being the little boy’s nanny for Rafe Hernandez (Galen Gering).

Evan maintained that ruse and remained hidden in plain sight for many months, until Ciara Brady (Victoria Konefal) put the pieces together and realized that Evan was responsible for Jordan’s murder.

Unfortunately, Ciara’s decision to march Evan into the prison at gunpoint to coerce a confession from him ultimately resulted in Evan’s confession being thrown out, even though the move was necessary to save Ben Weston’s (Robert Scott Wilson) life.

And now that Evan’s got his fierce sister Zoey Burge (Kelly Thiebaud) representing him, it looks like he’s going to stake on the murder charges.

As if that weren’t enough drama, Evan will soon divulge something big to Zoey. According to Days of Our Lives spoilers, Evan will soon tell Zoe a big secret he’s been carrying around.

Exactly what this secret is remains to be seen, but there’s a good chance it will have something to do with the legal case against Evan. Perhaps Evan’s got some critical information he’s been holding onto that would help Zoey defend him.

Of course, since Evan wants more than anything to ultimately get custody of David, he’s going to have to make sure that that he looks squeaky clean to the family court judge, and he’ll need to have been completely exonerated on the charge that he killed Jordan.

So, what could Evan’s big secret be? Well, one way to avoid those pesky murder charges could be to show that Jordan isn’t really dead. Could Evan be holding onto information about Jordan perhaps being alive?

It would certainly take some creative storytelling to get there, but this is DOOL, after all. People come back from the dead all the time!

And since Evan is the son of DOOL supervillain Orpheus (George DelHoyo), there’s probably no limit on what could have been done with Jordan. She could even be held hostage somewhere by Orpheus, all as a way for Evan to get closer to David.

And her murder could have been staged to frame Ben and eliminate him since he’s next of kin to David. Stranger things have certainly happened on DOOL!

We’ll see what happens, but Evan will lay some big secret on Zoey soon. What do you think Evan’s secret will be? Stick with the NBC soap and don’t forget to check CDL often for the latest sizzling DOOL news and spoilers.