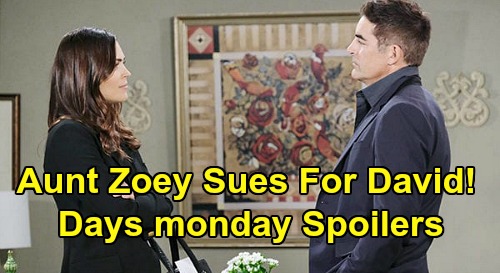 Days of Our Lives (DOOL) spoilers for Monday, April 20, tease that Marlena Evans (Deidre Hall) will remain rattled over her shocking visitor. Orpheus (George DelHoyo) just showed up Marlena’s door, which clearly brought a jolt of terror. Marlena has no way of knowing what Orpheus’ next move will be.

DOOL fans will recall that Marlena has been kidnapped and tormented by Orpheus on more than one occasion. As Days reminded viewers in those flashbacks, Orpheus even put Marlena in a coffin and tried to burn her alive along with Kayla Brady (Mary Beth Evans). When it comes to soap villains, Orpheus has always been one of the most ruthless!

Fortunately, Orpheus doesn’t plan to abduct Marlena or cause chaos during this visit to the townhouse. Perhaps Orpheus will even want to apologize. Orpheus isn’t someone who tends to show a lot of remorse, but Days may want him to reflect on his past misdeeds here. Maybe Orpheus will act like he wants to be a better man for his children.

Zoey Burge (Kelly Thiebaud) just revealed she’s Evan Frears aka Christian Maddox’s (Brock Kelly) sister, so it makes sense for Orpheus to talk about his kids on Monday. That’s especially true since Rafe Hernandez (Galen Gering) will be busy facing off with Zoey, who’ll deliver her next bombshell.

Days of Our Lives spoilers say Zoey will plan to sue for custody of David Ridgeway (Caleb and Kyler Ends). Rafe’s sure to feel like this is family is the “gift” that keeps on giving! Once Rafe gets updates on the sister shocker, he’ll take a stand against David’s aunt.

Jordan Ridgeway (Chrishell Stause) trusted Rafe to care for her son, so that’s what he’s been doing since David was just a baby. Rafe is David’s father in every way that counts, so he has no intention of letting David’s crazy bio family take him away.

Back with Marlena, she’ll have a chance to blast Orpheus. That’s completely fair after all the horrible things Orpheus has done. Of course, Marlena wasn’t Orpheus’ only victim.

Jennifer Deveraux (Melissa Reeves) will understandably be horrified over the news of Orpheus’ release. Just as reminder, Orpheus once strapped a bomb to Jennifer and shot her son, JJ Deveraux (Casey Moss).

Days of Our Lives spoilers say Jack Deveraux (Matthew Ashford) will console a nervous Jennifer on Monday, so at least she’ll have Jack by her side. As for Kayla, she’s made a decision about who she wants by her side, too. Unfortunately, Steve Johnson’s (Stephen Nichols) made one of his own – and Kayla isn’t going to approve.

Steve will insist he’s decided that Kayla should be with Justin Kiriakis (Wally Kurth). However, Kayla will wonder what makes Steve think he can just decide that for her! Kayla will suggest this is so typical of Steve and will rant at him for thinking he knows best.

Later, Justin Kiriakis (Wally Kurth) will see how upset Kayla is, so she’ll admit Steve let her go. Justin will fear he’s only winning by default, which means he needs to hash things out with Kayla. She’ll have to determine if Justin is always going to be her second choice or if she can put him first in her heart.

It sounds like another exciting DOOL episode’s on the way. Don’t forget to stop by CDL again soon for more Days of Our Lives spoilers, updates and news.