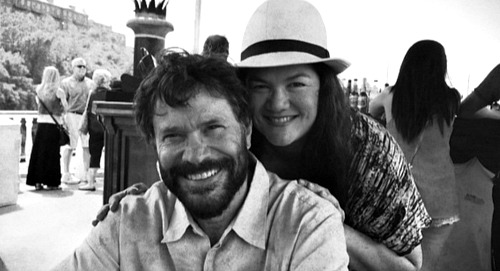 Days of Our Lives (DOOL) spoilers reveal that one NBC soap alum has an exciting reason to celebrate. DOOL fans certainly miss Bo Brady (Peter Reckell) in Salem – and many of us hope for his return one day. Never say never, especially when Dr. Wilhelm Rolf (William Utay) is so great at bringing people back from the dead!

However, Reckell’s living his best life and has found plenty of happiness offscreen. In fact, Reckell’s celebrating his wedding anniversary to his lovely wife, Kelly Moneymaker! This beautiful couple tied the knot on April 18 back in 1998, so their lasting romance is amazing to see. Not every duo can make it work for over two decades, but Reckell and Moneymaker still seem very much in love.

Unfortunately, Hope Brady (Kristian Alfonso) hasn’t been as lucky in the years since Bo passed away. Bo was Hope’s soulmate, so it’s been hard for her to find someone who completes her the way he did. Days of Our Lives has tried pairing Hope up with other leading men over the years, but they’ve never been able to recreate anything close to the “Bope” magic.

Hope is currently trying to work through some complicated feelings following her Princess Gina Von Amberg ordeal. Although Hope wasn’t in control of her actions at the time, she still blames herself for all the trouble she caused.

Hope tried to murder Jennifer Deveraux (Melissa Reeves) on more than one occasion – and Abigail DiMera (Kate Mansi) nearly became a target, too.

Days viewers know Jennifer reassured Hope, but this is still a lot for Hope to process. Days of Our Lives spoilers say Hope will get some help from Bo’s best bud during the week of April 20-24. Bo loved Steve Johnson (Stephen Nichols) with all his heart, so he would approve of Steve and Hope bonding over their shared struggles.

It doesn’t look like Hope and Steve will connect as anything more than friends, so Hope will still need a love interest down the road. Will anyone ever measure up to Bo? It’s tough to say since losing Bo was such a devastating blow – and that goes for Days of Our Lives fans as well!