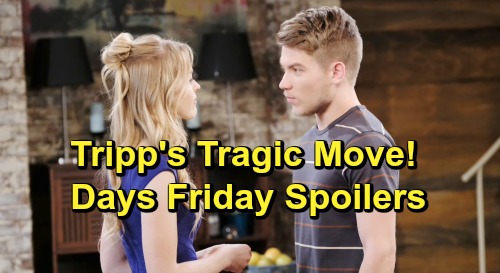 Days of Our Lives (DOOL) spoilers for Friday, June 21, tease that Sami Brady (Alison Sweeney) will have some advice for her brother. She’ll contend that Eric Brady (Greg Vaughan) needs to put “Nicole Walker” (Arianne Zucker) behind him and never look back. Sami won’t be happy about “Nicole’s” treatment of Eric. She’ll get that “Nicole” is grieving, but she’ll won’t think it’s fair for her to play the blame game.

“Nicole” holds Eric responsible for Holly Jonas’ (Harlow and Scarlett Mallory) “death” and has shoved him out of her life. DOOL fans know that’s because Kristen DiMera (Stacy Haiduk) is impersonating Nicole, but it all seems very real to Eric. As he continues to struggle with a broken heart, Sami will try to lift his spirits. She’ll hope Eric can work through his pain and start living a Nicole-free life.

Meanwhile, Kristen will push Xander Cook (Paul Telfer) to deal with Ted Laurent (Gilles Marini). They moved him to the DiMera tunnels, but that’s only a temporary solution. Days of Our Lives spoilers say Kristen will want rid of Ted permanently, so she’ll order Xander to make it happen. The problem is Xander will start bonding with the Frenchman and find it tough to do away with him!

Other Days of Our Lives spoilers say Eve Deveraux (Kassie DePaiva) will rip into Ben Weston (Robert Scott Wilson) again. She intends to take Ben down for multiple attempted murders, but her plan may hit some snags. We know Ben will be back out on the streets next week, so he’ll either make bail or somehow pull a fast one on Eve. Whatever the case, Eve will be riled up and ready to unleash her fury.

Over with Hope Brady (Kristian Alfonso), she’ll sense that everything isn’t as it seems. Ciara Brady’s (Victoria Konefal) strange behavior may tip Hope off to trouble. Hope knows her daughter awfully well, so she may figure out that Ciara isn’t giving her the whole story.

As Hope ponders the mystery, Tripp Dalton (Lucas Adams) will move forward with the plot. He’ll let Claire Brady (Olivia Rose Keegan) know they’re over for good, so she’ll fly off the handle like never before. Days spoilers say Tripp and Ciara will try to use Claire’s unhinged state to their advantage. This will be the first phase of their trap, which is set to go horribly wrong in the week ahead, June 24-28.