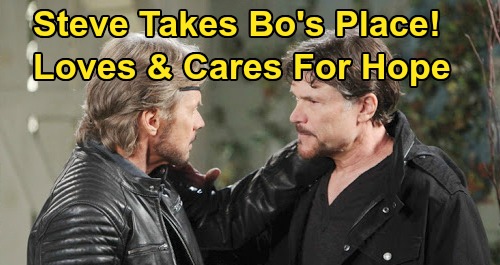 Days of Our Lives (DOOL) spoilers tease that Steve Johnson (Stephen Nichols) will finally come back in the true sense of the word. As DOOL viewers know, Steve is currently awake and alert, but he’s got amnesia. Fortunately, that amnesia will be temporary, and Steve will be back and fully himself soon. He’ll even remember his memories of Kayla Brady (Mary Beth Evans) and their life together, which will be great to see.

But things aren’t going to just magically get back to normal for Steve. Steve will have to learn what’s happened to him and about all the pain he’s inflicted on the people he loves.

He’ll also learn about his sister Adrienne Kiriakis’ (Judi Evans) death, and about Kayla’s new relationship with Justin Kiriakis (Wally Kurth). It’s going to be a lot for Steve to take, and he’s going to be in some serious emotional turmoil.

But it seems that Steve will get some comfort from one person who can truly understand what he’s going through. Days of Our Lives spoilers say that Hope Brady (Kristian Alfonso) will visit with Steve, and they’ll probably have much to discuss.

After all, together as Princess Gina Von Amberg (Kristian Alfonso) and Stefano DiMera (Stephen Nichols) they did quite a bit of damage to their collective loved ones.

And it makes sense that Steve and Hope would want to commiserate together. Steve and Hope are each dealing with a lot of missed time and the knowledge that they did horrible things while they were their alter egos.

And Steve and Hope are dealing with the difficulty of coming back from their experiences and re-integrating into their families and circle of friends.

Well, given that Hope is alone romantically right now, and that it doesn’t look like Steve and Kayla will be automatically getting back together, there’s a pretty good chance that Hope and Steve will grow closer.

DOOL spoilers say that Steve and Hope will bond, and it would be reasonable to expect that their relationship could grow into something more.

Of course, a Steve and Hope relationship could rub several people the wrong way. Even if Kayla sticks with Justin for the time being, she’s probably longing to be pretty bothered by the notion of Steve moving on with anyone, and especially with her former sister-in-law Hope.

Kayla might even question what Bo Brady (Peter Reckell) would think about the situation if he were alive to see his best friend Steve together with Hope.

Steve being with Hope probably would raise a few eyebrows among their family and friends, and among DOOL viewers, too. Steve and Hope have always been close, but they’ve never been a couple, probably stemming in part from Bo and Steve’s close friendship when Bo was alive.

But at this point in time, it seems like Steve and Hope’s pairing would make sense. What’s your take? Do you think that Steve and Hope should embark on a relationship?

Keep checking back with CDL for all your latest Days of Our Lives news, and be sure to tune in to the NBC soap on the regular. We’ll keep you informed about the newest DOOL spoilers as we hear them!