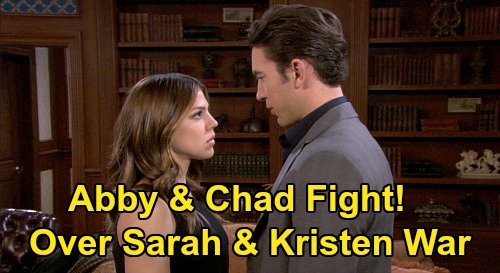 Days of Our Lives (DOOL) spoilers tease that two prominent Salem families will soon take sides in a major baby war. As DOOL viewers know, Sarah Horton (Linsey Godfrey) and Eric Brady (Greg Vaughan) have just learned that the baby they thought was theirs is actually the daughter of Kristen DiMera (Stacy Haiduk) and Brady Black (Eric Martsolf). It’s a terribly sad situation for Sarah and Eric, as they’re naturally going to have to hand the baby over to Kristen and Brady.

But it looks like a lot is going to happen before Kristen and Brady get their hands on the baby that everyone has been calling Mackenzie “Mickey” Horton for months.

According to DOOL spoilers, Sarah is going to flee with Mickey on the Titan jet that is set to take her and Xander Kiriakis (Paul Telfer) on their honeymoon. After Sarah dumps Xander for causing this whole mess and switching babies, she’ll take Mickey and scram.

Well, that’s going to leave some very worried people in Sarah and Mickey’s wake. It looks like Sarah will end up hiding out in Paris with Mickey, but Kristen, Brady, and Eric will have no idea where she and Mickey are.

Of course, Kristen and Brady will be beside themselves with worry, and they’ll be anxious to see their daughter and reclaim her. It doesn’t look like anyone will be worried about Mickey being harmed in any way. After all, Sarah absolutely loves that little girl.

But it seems that everyone will be worried that Sarah and Mickey could simply disappear off the face of the earth, which will be a horrifying thought for Kristen and Brady. They’ll just want to see their daughter, whose real name is Rachel Black, again. It will be a race to find Sarah and the baby.

Well, it seems like the respective families of Sarah and Kristen are going to start speaking their minds about the baby drama. And for Chad DiMera (Billy Flynn) and Abigail DiMera (Kate Mansi), it looks like their disagreement over the issue could cause some marital discord.

Days of Our Lives spoilers say that Chad and Abigail will take opposite sides in the matter, with each supporting a different mother in the baby battle.

It appears that Chad will predictably take Kristen’s side in the matter. He might argue that Sarah has no right to take someone else’s daughter – a DiMera heir, no less – and flee the country.

Chad will probably sympathize with Sarah over her tragic loss and the terrible situation she’s in, but ultimately it’s hard to imagine him not siding with Kristen in the matter.

Similarly, it’s difficult to imagine Abigail not siding with a fellow Horton in this dispute. Abigail might argue that Sarah is understandably distraught at the thought of giving up the baby she’s believed all these months to be hers.

Plus, the reality here is that Sarah is facing handing over the baby to someone with Kristen’s history of instability and misdeeds. It looks like Abigail will come down fully understanding Sarah’s decision to take the baby and bolt.

In fact, Chad might even help Kristen in her quest to track down Sarah and take back the baby that’s rightfully hers. That could cause more discord between Chad and Abigail.

In the meantime, it looks like the DiMera and the Horton families probably won’t see eye to eye on the matter, and Chad and Abigail will be right in the middle of the drama!

Keep on watching the NBC soap, and remember that CDL is your trusted source for all the hot Days of Our Lives spoilers and news. We’ll keep you up to date on the latest!