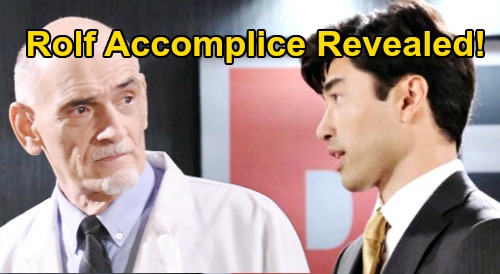 Days of Our Lives (DOOL) spoilers tease that Gabi DiMera (Camila Banus) could go back to prison for a crime she didn’t commit. As DOOL viewers know, Gabi is about to go on trial for the drugging of Abigail DiMera (Kate Mansi), who was dosed with an experimental drug that DiMera Enterprises was developing. The drug, which is a powerful hallucinogen, has caused all sorts of trouble for Abigail, and she’s currently in a clinic for treatment.

Well, Chad DiMera (Billy Flynn) recently told Jack Deveraux (Matthew Ashford) that Abigail was doing well on some days, but that she was also actively hallucinating and that the drug had caused some possibly permanent changes in her brain chemistry.

That doesn’t sound good, and it means that Gabi could be in big trouble if she’s found guilty of drugging Abigail.

Of course, DOOL viewers know that Gabi is innocent of this particular crime, and that Abigail was drugged by someone else. Rafe Hernandez (Galen Gering) went to see Dr. Wilhelm Rolf (William Utay) to try to get him to admit who actually drugged Abigail, but Rolf wouldn’t cough up the information.

Rolf is clearly working with someone else here, but exactly who that is remains up in the air.

There’s been speculation by fans in the past that it could be Vivian Alamain (Louise Sorel) who has been working with Rolf, perhaps in order to bring Gabi down since Vivian has never liked Gabi.

But new Days of Our Lives spoilers say that Gabi will soon try to enlist Vivian’s help, most likely in getting Jake Lambert (Brandon Barash) to remember his past as Stefan DiMera (Brandon Barash).

So, it could very well be someone else who Rolf has been working with to frame Gabi. After Rafe visited Rolf at Statesville, Rolf called someone to tell him or her that Commissioner Hernandez was asking questions, but that he hadn’t given the person up.

So, who was Rolf talking to? And if it isn’t Vivian, then who could it be?

Well, there’s someone who recently turned up in Salem who we haven’t seen for a while, and that’s Li Shin (Remington Hoffman). Li, who is the son of DiMera board member Mr. Shin (Michael Hagiwara), made a big deal out of ripping the CEO title away from Gabi and giving it to Chad, making it seem like he was on Chad’s side in the Chad/Gabi war.

But what if Li is actually on his own side here, and he’s the one working with Rolf? It would make some sense – after all, if Li was interested in the CEO spot himself, then he could be trying to neutralize Chad by going after Abigail and causing a family crisis that would take Chad away from the company.

The whole thing has already succeeded in getting Chad out of Salem and off the DiMera company radar for a while, and maybe Li thinks he can swoop in and get the coveted CEO spot.

Or perhaps Li has other motivations for teaming up with Rolf. After all, Rolf needs some alliances in the DiMera world, and Li would be a good person to team with. We’ll see what happens here, but if a mystery person (who isn’t Vivian) is Rolf’s partner, then it could very well be Li.

What do you think of our theory? Do you think that Rolf’s partner in crime could be Li? Stay tuned to Days of Our Lives and be sure to keep CDL at the ready so you don’t miss any DOOL spoilers, daily recaps, or news.