Days of Our Lives Spoilers: Marlena Gets Steamy With Stefano – Becomes Shocking Stepford Wife After Implant? 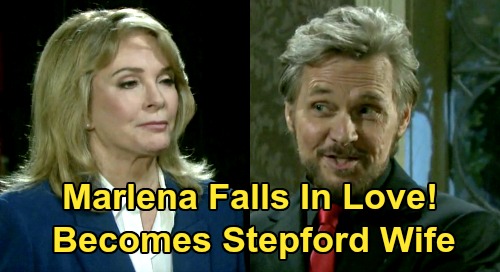 The plan was for her to exchange herself for Kayla Brady (Mary Beth Evans) and for John Black (Drake Hogestyn) to burst in and take down Stefano in the process, but the plan hit a snag. Wilhelm Rolf (William Utay) ended up attacking John, and now Stefano’s got Marlena.

Well, Stefano’s got a pretty sinister plan in place. With Rolf’s help, he plans to mess with Marlena’s brain in order to make her more susceptible to falling in love with him.

It looks like Rolf will implant a chip, similar to what he did with Hope Brady (Kristian Alfonso) when he turned her into Princess Gina Von Amberg. He wants to keep the essence of Marlena intact, but make her willing to accept him as her paramour.

It’s a devious plan, but from Stefano’s perspective, it’s the only way that he’ll ever get his “Queen of the Night” to love him. He considers it to be simply a gentle push in the right direction.

Of course, the thought of all this is simply horrifying for Marlena, who has been unwavering in her love for John for decades now. She’s begged Stefano not to go through with his plan, and there’s probably a part of her that doesn’t believe that she’d ever love Stefano under any conditions.

But what if Stefano’s plan works? After all, Rolf was successful in turning Steve into Stefano, and he turned Hope into Princess Gina. Chances are, he’s going to be successful in his plan with Marlena as well, but it might not come without a little work.

According to CDL Days of Our Lives spoilers, Rolf will indeed perform a procedure on Marlena, and Stefano will do his best to connect with her afterwards.

We’ll see how that goes. Days of Our Lives spoilers indicate that it will take a bit of work on Stefano’s part to get thorough and connect with Marlena in a romantic way.

Marlena will probably resist the implant, or whatever Rolf subjects her to, so Stefano could be in for an uphill battle. It doesn’t look like Marlena’s just going to suddenly “submit” to Stefano the way that he wants.

However, DOOL spoilers do indicate that he’ll eventually make headway with Marlena, perhaps after Rolf tweaks the implant or makes other changes to the protocol.

Does this mean that Marlena will ultimately become submissive and find herself attracted to Stefano romantically? That’s certainly Stefano’s goal, and if he and Rolf get their way, then Marlena could become like a real Stepford Wife, with a blind devotion to him.

Of course, if that happens, then Stefano will have to keep Marlena hidden away somewhere and far away from John and her family. Of course, it would be just awful for everyone involved if Marlena and Stefano actually got intimate as a couple.

John would certainly be out for blood, but it would be a tricky situation because he’d be really after Stefano whereas Marlena would have been technically intimate with Steve. What a mess.

At any rate, John, Kayla, Roman Brady (Josh Taylor), and Justin Kiriakis (Wally Kurth) will be in a race against time to find Marlena and rescue her from Stefano’s clutches. Do you think they’ll find Marlena before she and Stefano connect as a couple? Stick with DOOL and don’t forget to check CDL often for your latest Days of Our Lives news, spoilers, and updates.