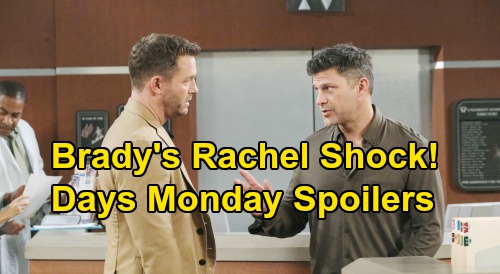 Days of Our Lives (DOOL) spoilers for Monday, April 13, tease that Brady Black (Eric Martsolf) will get some stunning news from Eric Brady (Greg Vaughan) and Nicole Walker (Arianne Zucker). Now that Sarah Horton’s (Linsey Godfrey) in the loop on the baby swap, it’s time for Brady to know the truth, too.

As Eric pointed out that he has to tell his brother, Brady walked in and expressed curiosity. Brady’s naturally wondering what this is all about, but he’s in for a shock when he hears the whole story.

Although Brady has battled suspicions about Mackenzie “Mickey” Horton being his daughter, it’ll still be a bombshell to learn what really happened.

Days spoilers say Brady will be furious with Xander Kiriakis (Paul Telfer) – and his heart will certainly break for Sarah and Eric. However, Brady will also feel great relief and joy when he realizes Rachel DiMera Black is still alive.

It’ll be tough for Brady to wrap his head around all his emotions, but he’ll do his best and prepare to tell Kristen DiMera (Stacy Haiduk) the truth soon.

Speaking of Kristen, she’s in the middle of a meltdown at the hospital. Kristen signed up for a program to hold babies who can’t be with their mothers for various reasons, but the time has come to give the baby back. Unfortunately, Kristen is so desperate to keep holding this little one that she’s refusing to give her back!

Days of Our Lives spoilers say John Black (Drake Hogestyn) and Marlena Evans (Deidre Hall) will jump in the middle of all this on Monday. They’ve had their fair share of issues with Kristen, but they can understand that she’s in pain over her loss.

Marlena and John will step up to gently help Kristen part with the baby. There’ll be a surprisingly tender moment between “Jarlena” and Kristen. Days spoilers say Kristen will continue to struggle over Rachel’s “death,” but she’ll get updates on her daughter’s survival later in the week.

Over with Sarah, she’s looking awfully angry over at the Kiriakis mansion! Sarah was devastated over the baby switch shocker, but now her rage is hitting hard. Nevertheless, Sarah will manage to contain that rage long enough to set Xander up for a huge fall.

Days of Our Lives spoilers say the wedding will move forward, but that’s only because Sarah wants to bail on their vows at the last second. The goal of these DOOL nuptials is to cause Xander pain, so stay tuned for Xander’s worst nightmare.

Back at the hospital, Kayla Brady (Mary Beth Evans) will spark a big breakthrough for Steve Johnson (Stephen Nichols). Steve’s been dealing with amnesia, but Kayla’s trying to help by telling him their love story. The plan will pay off since Steve’s memories are about to come flooding back.

It sounds like some great scenes are on the way, so DOOL fans won’t want to miss all the action! CDL’s your hotspot for fantastic Days of Our Lives spoilers, updates and news.