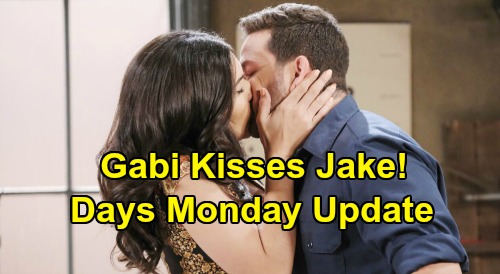 Days of Our Lives (DOOL) spoilers update for Monday, May 4, teases that Kristen DiMera (Stacy Haiduk) will admit the truth to Lani Price (Sal Stowers). Once Kristen comes clean about plunging the knife into Victor Kiriakis (John Aniston), Lani will have to make a difficult choice. She’ll have to decide if she’s going to break the rules for Kristen’s sake or uphold the law and let Kristen go down.

Lani still considers Kristen a friend from their time in the convent together. Kristen has given Lani a great deal of support, so Lani won’t want to turn her back on her pal.

Days of Our Lives spoilers say a plan will form to keep Kristen out of police custody. Lani will make arrangements to help Kristen flee, so Kristen will definitely appreciate that.

Kristen finally has a chance to be a mother to Rachel DiMera Black, so she won’t want to lose it. Going into hiding isn’t ideal, but Kristen can’t risk going to jail right now.

As for Brady Black (Eric Martsolf), he’ll be on the hot seat when Eli Grant (Lamon Archey) returns from the hospital. Victor just revealed Kristen as his stabber, so Eli will demand an explanation from Brady – who already confessed.

That’s not true, but Brady could easily try to sell that story. He might contend that his grandad is protecting him and wants Kristen to take the fall.

However, Eli will have a hunch Kristen really did stab Victor. Once Eli realizes Kristen has fled, it’ll only strengthen his suspicions. It won’t be long until Eli confronts Lani about helping her violent bestie! In the meantime, Sarah Horton (Linsey Godfrey) will get a little violent herself.

In Paris, Sarah will tell Rex Brady (Kyle Lowder) not to call the cops. She’ll make it seem like she’s actually going to reunite Rachel with Kristen and Brady.

Rex will comfort Sarah back at the apartment, where he’ll eventually decide to give Kristen a heads-up on the situation. Rex will just want Kristen to know that Rachel’s safe and coming home soon.

Unfortunately, Sarah will find out some significant info right before Rex makes the call. When Sarah gets updates on Brady potentially going to prison, panic will set in. Sarah won’t think Kristen’s capable of being a good mother without Brady to guide her.

As a result, Sarah will revert to protective “Mickey” mode and bash Rex in the head to knock him out. Rex’s call to Kristen will be disconnected, but it’ll be something Lani can trace later on. This should be the key to helping Kristen figure out where Sarah and Rachel are.

Days of Our Lives spoilers say Rex will be bound and gagged when he awakens, but Sarah will eventually remove the gag so he can speak. Rex will point out that the other employees will notice he’s missing from work.

Sarah won’t particularly care about that in this moment. She’ll just be focused on keeping Rachel for herself, so the details aren’t going to matter.

Other DOOL spoilers say Abigail DiMera (Kate Mansi) will have another disturbing vision. Abigail was relieved to learn she’d been drugged since it meant she wasn’t losing it again. Sadly, Abby will have another hallucination after the drug’s no longer present.

Although Abigail’s system will be drug-free, the chemistry of her brain will change and leave her seeing things that aren’t there.

While Chad DiMera (Billy Flynn) grows fearful over Abby’s continued ordeal, Jake Lambert (Brandon Barash) will insist he’s never seen Gabi DiMera (Camila Banus) before. Gabi will slap Jake and argue that he needs to be honest. She’ll think all this “Jake” stuff is a big pile of lies.

Jake will assure Gabi that he doesn’t have a clue what she’s talking about, but Gabi will believe this is none other than Stefan DiMera (Brandon Barash). Despite Jake’s claims to the contrary, there’s a strong possibility that Gabi’s right!

Gabi will suggest a Dr. Wilhelm Rolf (William Utay) transformation as another option, but Stefan lying makes more sense. Days has offered some great clues that suggest “Jake” may be putting on a show, so we’ll see how it all plays out down the road.

As other DOOL news emerges, we’ll provide the latest details. Days fans will want to check out Monday’s exciting scenes! Be sure to drop by CDL regularly for thrilling Days of Our Lives spoilers, news and updates.