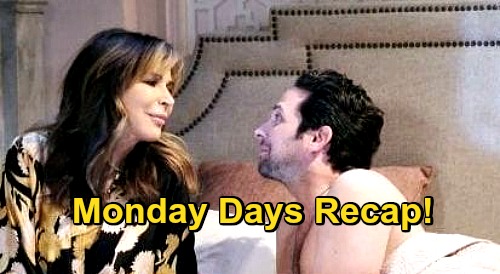 Kate asked where Abigail got the letter, and an agitated Abigail explained about finding the letter in Kate’s room. Jennifer Deveraux (Cady McClain) wondered what the letter said, and Kate made up some phoney story which no one bought.

Suddenly, Abigail got ill and had to leave the room, and Jennifer read the letter, which started with, “Dear Kate, I knew this had to end the moment I woke up I your bed this morning.”

Jennifer looked horrified, and Jack said that the letter was ancient history, Jennifer stormed out of the restaurant with Jack trailing after her.

Steve Johnson (Stephen Nichols) marched up to Kate and blasted her about seducing Jack, prompting Kate to fire back hat he was no moral compass, given that he was turning a blind eye to his son raping her granddaughter.

Elsewhere in the restaurant, Gwen Rizczech (Emily O’Brien) pretended to Chad DiMera (Billy Flynn) to be upset over this whole situation. Chad bought it.

Jack caught up to Jennifer in the park, and Jennifer ranted at Jack, who just wanted to explain himself. Jack said that Jennifer knew only a part of what happened, and that she deserved to know the truth.

Jack said that he had spent months being afraid that Jennifer would never open her eyes again while she was in the coma, and that his night with Kate wasn’t planned.

Viewers saw a flashback showing Jack going to the pub in the evenings after spending each day with Jennifer at the hospital. Jack explained that he started to drink to ease the pain, and at that time, Kate was working at the pub.

Over at the DiMera mansion, Kate returned to her room where she found the box of letters on the floor overturned. Jake Lambert (Brandon Barash) came in, and Kate explained how Jack started coming into the pub every night and she tried to comfort him.

Back in the park, Jack explained to Jennifer that all he and Kate talked about was her. Jack said that one day, he was at the hospital, and he had seen Jennifer’s hand move, but Jennifer didn’t wake up.

Jack said that he then went to the pub, and viewers saw a flashback of Jack belting back shots and Kate offering to call him a cab. Jennifer surmised that Jack must have stayed with Kate that night, and Jack confirmed that he did.

Back at the DiMera mansion, Kate and Jake continued their conversation, with Kate explaining how she and Jack made a connection and how she comforted him that evening while he cried over Jennifer’s coma.

In the park, Jack was continuing telling his story to Jennifer, and Jack told her that to his everlasting regret, he slept with Kate that night.

Jennifer looked really upset, and viewers saw a flashback of Jack waking up alone and horrified in Kate’s room, then leaving the pub and looking at Kate on his way out. Jack explained that he then went straight to the hospital where Abigail was at Jennifer’s bedside.

The flashback continued, with Jack sitting guiltily at Jennifer’s bedside and writing Kate the letter. Back at the DiMera mansion, Kate told Jake that Jack never came into the pub again after that, and that they managed to avoid each other for a while, until Jack and Jennifer moved into the DiMera mansion.

Viewers then saw a flashback of Jack telling Kate that he and Jennifer moved into the mansion. As it turned out, Gwen overheard the exchange, which neither Jack nor Kate knew about.

Back at the DiMera mansion, Jake asked Kate why she held onto the letter, and Kate replied that it meant something to her, and that she had felt good about helping Jack. “For what it’s worth, I’m not judging you,” Jake said, leaning in for a kiss with Kate.

Back at Julie’s place, Gwen and Chad continued talking while Abigail was still in the bathroom sick. Chad told Gwen not to blame herself, and Gwen pretended to be upset. Chad hugged Gwen, who looked satisfied with herself.

Later, Chad went to check on Abigail in the bathroom and realized that she was gone.

Finally, back in the park with Jennifer and Jack, Jack explained that there was never a right time for telling her the truth.

Jack said that when Jennifer woke up from the coma, there were so many other awful things for Jennifer to learn and that he couldn’t burden her just to unload himself of all the guilt. Jennifer sadly thanked Jack for telling her the truth, and Jack asked if Jennifer could ever forgive him.