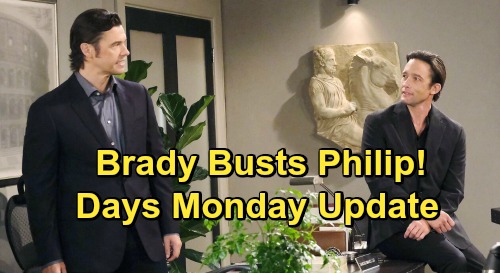 Days of Our Lives spoilers update for Monday, October 19, tease that Kayla Brady (Mary Beth Evans) will score the DNA from Henry Horton (Kinsley and Jayna Fox) that she needs for the paternity test on Tripp Dalton (Lucas Adams).

As viewers are aware, Kayla showed up at Nicole Brady’s (Arianne Zucker) apartment to get a DNA swap from Henry, but she wasn’t exactly forthcoming about the details. Allie Horton (Lindsay Arnold) readily agreed to the test, in order to help prove her allegation that Tripp assaulted her and fathered Henry.

Well, the truth here is that the DNA test was Kayla’s idea, but Tripp flatly refused to consider participating in such a thing. Of course, that only made him look like he had something to hide, and it greatly concerned both Kayla and Steve Johnson (Stephen Nichols).

On Monday’s episode of Days of Our Lives, it looks like Kayla will use the toothbrush that Steve stole from Tripp along with Henry’s swab to initiate a DNA test comparing the samples.

But Tripp will know nothing about the DNA test, and he’d probably be angry to think that Steve and Kayla don’t take him at his word. It seems that Tripp just isn’t thinking clearly and doesn’t realize that the proof from the test, assuming it comes back not a match, would immediately put an end to his troubles.

But Tripp seems more focused right now on whether the people he loves will have his back.

At any rate, it seems that another secret Salem DNA test will go forward, and as we head into the big blackout that will occur on Tuesday, October 20, that DNA test may be in total limbo for a while. Will the samples degrade, affecting the accuracy of the test? We’ll have to wait to see!

Meanwhile, on the new episode of Days of Our Lives on Monday, October 19, Brady Black (Eric Martsolf) will head to the Kiriakis mansion, possibly to talk with Victor Kiriakis (John Aniston) about Kristen DiMera’s (Stacy Haiduk) confession.

However, Days of Our Lives spoilers reveal that Brady will catch Philip Kiriakis (Jay Kenneth Johnson) on the phone with that mystery person he keeps talking to.

As Days of Our Lives viewers know, Philip is in cahoots with someone off-screen, and the plan is clearly to oust Xander Kiriakis (Paul Telfer) from his Co-CEO seat so that Philip can run Titan Industries on his own.

As Philip told the mystery person recently, he needs full reign over the company so he can use it to launder money, so clearly Philip is caught up in something pretty bad here.

Well, we’ll see on Monday’s episode exactly what Brady overhears, but he’ll hear something indicating that Philip is conspiring against Xander. Brady will needle Philip about his plans, and now Philip will have another thorn in his side besides Xander.

But what will Brady do from here – will he warn Xander about Philip’s phone conversation about him? It’s not like Brady and Xander are close, so Brady might just decide to keep his mouth shut and stay out of it.

Monday’s Days of Our Lives episode is going to be terrific, so stay tuned to the NBC soap! Remember, we’ll keep you updated on all the latest DOOL spoilers and news, and be sure to check out our daily Days of Our Lives recaps as well. We’ve got you covered!