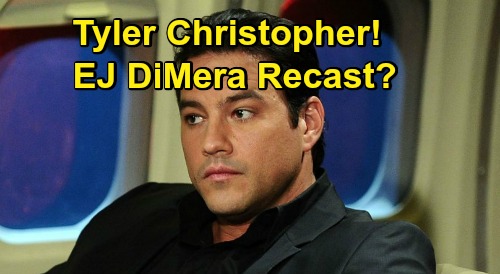 Days of Our Lives (DOOL) spoilers tease that some interesting developments about an EJ DiMera recast could be coming to the NBC soap. As you might be aware, Sami Brady DiMera (Alison Sweeney) is set to return to Days of Our Lives in the future, and her stay is planned to be considerably longer than her recent stints on the show.

Sami has returned here and there, while EJ DiMera (James Scott) has been convalescing in Europe after being in the Nashville warehouse fire a couple years ago.

You might remember that EJ was burned very badly, and these injuries were on top of the cognitive deficits that he suffered after Wilhelm Rolf (William Utay) brought him back to life after he was “killed” on screen.

Well, when Sami does return to Salem for her upcoming extended stint, what’s going to happen to EJ? Last we saw EJ, he was bandaged up head to toe, but at some point TPTB may want to bring the character back and have him recover somewhat, or even fully.

You might also remember that we recently reported a statement made by James Scott, who portrayed EJ DiMera from 2006-2014. James was commenting on a fan’s Instagram request for him to return to the show, and he said:

That seemed to clear up one matter – and that’s that James Scott certainly won’t be portraying EJ when and if the character is brought back on canvas with Sami when she returns.

That means that if the character is brought back, then he’d need to be played by someone else, and we have someone in mind who might be a good EJ…Tyler Christopher.

Days of Our Lives fans will remember Tyler as the original Stefan DiMera, before Brandon Barash took over the part. It wouldn’t be too much of a stretch to imagine that Tyler could adopt a British accent and play the part of EJ, and it would probably be something that would absolutely delight fans.

One thing’s for sure – whoever does end up portraying EJ DiMera, assuming that the part gets recast, will need to be someone with great presence and charisma, and Tyler Christopher fits the bill.

It will be interesting to see what happens when Sami returns. It seems like every time she’s in Salem, she’s got to rush back to take care of EJ, so it’s likely that if she’s going to be in Salem for a while, then she could very well bring back EJ with her.

EJ’s return to the show would make for some great drama, especially if he’s fully functioning and can take on Chad DiMera (Billy Flynn) and Jake Lambert (Brandon Barash).

We’ll see where this all goes! Would you be in favor of Tyler Christopher playing the role of EJ DiMera? Stay tuned to Days of Our Lives and don’t forget to check back with us frequently for the latest DOOL spoilers, daily episode recaps, and news. Here at CDL, we’ve got you covered!