Days of Our Lives (DOOL) spoilers for the next two weeks tease that things are about to go haywire in Salem. During the week of October 19-23, Tripp Dalton (Lucas Adams) will be kept in the dark while Kayla Brady (Mary Beth Evans) moves ahead with the DNA test. Steve Johnson (Stephen Nichols) will try to help Kayla keep things quiet until they can get the results.

Of course, it could be a long wait since a blackout’s about to hit! This will be the start of one very long Salem night. Days spoilers say Clyde Weston (James Read) and Orpheus’ (George DelHoyo) alliance will lead to major mischief.

Once the power’s out in Salem, Orpheus and Clyde will carry out a plan while Dr. Wilhelm Rolf (William Utay) carries out one of his own.

DOOL fans can expect Clyde to track Ben Weston (Robert Scott Wilson) down soon after he breaks free. Ben will be in a bind since Clyde will need his son’s help.

We’ll also see a vision of Ciara Brady Weston (Victoria Konefal) in the week ahead, so that’ll leave Ben more distraught than ever once she’s gone.

Over with Charlie Dale (Mike C. Manning), he’ll literally get stuck at the office due to this blackout. Days of Our Lives spoilers say Claire Brady (Isabel Durant) will come to Charlie’s rescue and share some laughs with him in the process.

Back with Orpheus, he’ll confront Marlena Evans (Deidre Hall) and leave her terrified about what’s coming next. Dr. Rolf will threaten to murder Chad DiMera (Billy Flynn) and may wind up putting Gwen Rizczech (Emily O’Brien) in a tight spot, too.

Jan Spears (Heather Lindell) will bring some spooky moments for Belle Black (Martha Madison) when she slips in the house undetected. The result will be quite a scare for Belle, who’ll face the threat of a physical attack.

During the week of October 26-30, DOOL spoilers say Orpheus will make his demands – and he’ll be able to do that because of Clyde’s kidnapping success.

Allie Horton (Lindsay Arnold) will get tricked into letting Clyde in Nicole Brady’s (Arianne Zucker) place, which will give Clyde a chance to steal Henry Horton (Jayna and Kinsley Fox).

As you can imagine, Allie and Nicole will freak once they see that Henry’s missing. Days spoilers say Marlena will learn the baby’s life is at stake, so she’ll have to free Evan Frears aka Christian Maddox (Brock Kelly) from Bayview.

That’s where Evan is currently rotting, but Orpheus will apparently push for an even trade: his son’s freedom for the freedom of Marlena’s grandson. After Clyde does his part to help Orpheus, he’ll try to talk Ben out of avenging Ciara’s death. 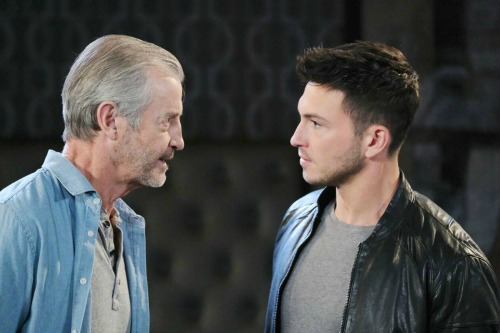 Clyde won’t care about Vincent Belman’s (Michael Teh) life, but he’ll care about whether Ben winds up back in the slammer!

Back with Chad, he’ll realize Gwen’s exhibiting some suspicious behavior and wonder what she might be plotting. As for Dr. Rolf, his latest creation will be displayed in all its wild scientific glory.

Kayla will get roped into the project Rolf’s come up with, but she’ll find the whole thing to be pretty horrific.

Other Days of Our Lives spoilers say Orpheus and John Black (Drake Hogestyn) will have a showdown, so that should be exciting with John in angry hulk mode. Marlena will ultimately get Evan out of Bayview, so she’ll deliver Orpheus’ son and hope he keeps his end of the Henry bargain.

Later, Jack Deveraux (Matthew Ashford) and Jennifer Deveraux (Cady McClain) will find a surprising letter that was written by Hope Brady (Kristian Alfonso). This letter should allow Hope to tell her friends and family members goodbye.

Hope may request that the news be spread, so Jack and Jennifer should bring Doug Williams (Bill Hayes) and Julie Williams (Susan Seaforth Hayes) up to speed. It sounds like the loss of Ciara was just too much for Hope to bear!

Perhaps Hope took off for parts unknown to cope with her grief. Regardless, this farewell note will offer some closure to Hope’s story.