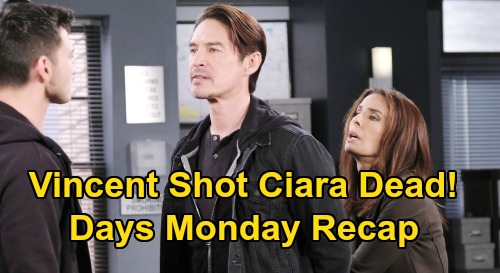 Kayla and Roman wondered about whether Tripp could be the father of Allie’ baby boy, and Roman said that he’d be ok with it if Tripp stepped up and did the right thing. Roman said that Tripp has really grown into a decent guy and that he’s learned from his mistakes. Kayla agreed.

Lani said that she’d gather all the relevant information and take it to the DA, but that she could be told that it falls under the jurisdiction in London.

Off-screen, Allie told Lani the whole story, and Lani asked if Allie believed that Tripp was the father of her baby. Allie said that Tripp had to be the father, since she wasn’t with anyone else.

Allie wanted to know if Lani believed her, and Lani said that she did. “I don’t remember much, but I remember saying no,” Allie said.

After Lani took off, Nicole reassured Allie that she had done the right thing, and that what’s important is that she spoke up and told the truth.

Meanwhile, over at Kayla and Steve Johnson’s (Stephen Nichols) place, Tripp told Steve that he never slept with Allie, and he recounted how they met at the club. Tripp said that Allie was drunk that that he helped her to get home.

Tripp went on, saying that he was attracted to Allie, and that she kissed him at her apartment, but that he realized that she was too drunk and that he made sure she got to bed ok.

Tripp said that he wrote Allie a note with his first name and phone number on it and left it for her at her apartment, but that he never heard back from her again.

Tripp told Steve about seeing Allie in the park yesterday and her slapping him across the face, but he said he had no clue why she seems to be so angry with him. Soon, there was a knock on the door, and it was Lani saying that she needed to speak to Tripp down at the station.

At the police station, Eli Grant (Lamon Archey) reeled as Melinda Trask (Tina Huang) rehashed what was on the security footage and how it was enough to take to the grand jury for charges against Lani.

Through their conversation, Eli slipped up and said that he arrested Kristen DiMera (Stacy Haiduk) the day after she returned to Salem, and Melinda realized that Eli knew exactly when Kristen had come back to town because of Lani.

Melinda insisted that she would forgo any charges against Lani if Eli helped her put Kristen away once and for all. Melinda said that she wanted a taped confession, which Eli said was entrapment.

Melinda said that she’d worry about the legal aspects of the whole thing, and that Kristen was going down. “Whether your wife goes with her is up to you,” Melinda said.

In the squad room, Vincent Bellman (Michael Teh) told Hope Brady (Kristian Alfonso) and Ben Weston (Robert Scott Wilson) about how Ciara stabbed him with his own syringe and the drug made him think that Ciara was Wendy Taylor (Denice Duff).

Vincent calmly stated that he realized that Ciara wasn’t Wendy, he shot her.

Hope and Ben reeled, as Vincent insisted that Ciara was dead before the car even exploded. Ben roughed up Vincent and looked him in the eye, then he declared that Vincent was lying. “We’re being played,” Ben told Hope. Vincent said, “Ciara’s dead and it’s all because of you.”

Not really knowing what to believe but afraid that Vincent was telling the truth, Hope led Vincent out of the room and back to his cell. “Ciara’s blood is on your hands and don’t you ever forget it!” Vincent said to Ben as he was being ushered out of the squad room.

Afterwards, Hope called Shawn Brady (Brandon Beemer) and told him about Vincent’s statement, while Ben insisted that Vincent was lying. “I still think he has her locked up somewhere,” Ben said.

Hope had an idea, and she got Vincent’s gun out of the evidence room to find that one bullet was missing from the chamber. Still, Ben didn’t think that meant that Ciara was dead for sure.

Hope walked out of the room horrified and in a daze, and Ben sat looking at Vincent’s gun in its evidence bag. “Vincent, there’s something maybe you didn’t think about,” Ben said to himself. “If you killed Ciara, I’ve got nothing to live for. So if she’s dead, so are you.”

That was a terrific episode of Days of Our Lives, and there’s a lot more coming tomorrow, so stay tuned! Stick with the NBC soap and don’t forget to keep CDL at the ready for the latest Days of Our Lives spoilers, news, and our daily episode recaps.