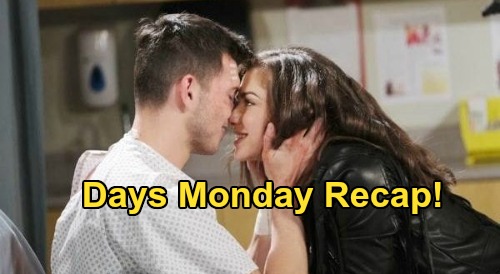 Marlena and Brady stepped out while Kayla Brady (Mary Beth Evans) examined John. Brady worried that John suffered from brain damage. Brady made a call while Marlena went back into John’s room. Marlena explained to John that she was his wife, and that Brady was John’s son with his first wife.

Marlena explained more about their life together, and then John asked if he called Marlena “Doc.” John then smiled and revealed that he now remembered everything. Brady came in, and John joked with him, calling him “Bob.” Brady was thrilled to see that his dad was ok.

Over in Ben Weston’s (Robert Scott Wilson) room, Ben dreamed that Ciara Weston (Victoria Konefal) was there with him. Ben told Ciara that he thought she had died, but Ciara said that she was right there, and Ben said that they were going to plan the future they had always talked about. Ben then had a series of dreams about his future with Ciara.

First, Ben dreamed about honeymooning in a tropical paradise with Ciara. He then moved to a lengthy dream about Ciara telling him that they’re having a baby.

In the dream, Ciara reassured Ben that he’d be a wonderful father. Next, Ben dreamed being with Ciara and their newborn baby boy in the hospital shortly after his birth. In the dream, Ben suggested to Ciara that they name their son Bo Brady Weston, which Ciara loved.

Ben then dreamed about unpacking in a new apartment, with Ciara happy and baby Bo sleeping in the other room. Finally, Ben dreamed about giving Ciara a present on Mother’s Day, but when Ciara opened the present, it was her wedding rings.

In the dream, Ciara and Ben argued about why Ben would give Ciara a present that she already had. Suddenly, Ben woke from his dreams and realized that he was holding Ciara’s rings in his hands, and he remembered that Ciara was gone.

At Lani Price-Grant (Sal Stowers) and Eli Grant’s (Lamon Archey) apartment, Lani got Rachel Black ready to go back to her mom over at the Salem Inn. Lani talked softly to Rachel, saying that she hoped that Eli would learn to let the situation with Kristen DiMera (Stacy Haiduk) go.

At the Salem Inn, Kristen reluctantly let Eli in her room. Kristen thanked Eli for covering for her. “Who said I was covering for you?” Eli grumped. Eli blasted Kristen for not really caring about Lani and using their friendship to stay out of prison. Eli then started to place Kristen under arrest, and Kristen pulled out all the stops.

First Kristen tried the “I’m a mom” card, then she tried to play on Eli’s emotions by bringing up the child that he and Lani lost. Eli didn’t at all appreciate that, and then Kristen said that Lani would be upset if Eli arrested her. None of it worked on Eli.

As Eli was about to arrest Kristen, Lani and Rachel knocked at the door. Eli answered the door, and Lani was horrified. “How could you?” Lani said, but Eli said that he had a job to do. Eli cuffed Kristen and ushered her out the door as Kristen begged Lani to take care of Rachel.

At the police station, Hope Brady (Kristian Alfonso) talked with Eve Donovan (Kassie DePaiva), who wanted to know if Hope had found Vincent Belman (Michael Teh).

Hope explained about the explosion to Eve, and how Vincent had his own agenda as the fiancé of Wendy Taylor (Denice Duff). Eve asked if Hope got a chance to say goodbye to Ciara, but Hope said that Ciaras’ wedding and engagement rings were all that was found.

Later, once Eve was taken back to her cell, Eli dragged Kristen into the interrogation room, where Kristen asked for her phone call. Eli handed her a phone and went into the squad room where Lani stood glaring at him big time.

Lani explained that an aide was watching Rachel, and she asked why Eli didn’t level with her and why he lied to her face.

Eli explained that he started thinking about Ciara, and that he felt like there was no justice in this world. Eli said that he got mad as he thought about it, and he just ended up at Kristen’s door. “The law is for everybody,” Eli insisted.

But Lani remained defiant, saying that Eli traded their personal relationship so he could feel like a hero.

Back at the hospital, Brady got John caught up on where he’s been for the past few weeks, then he stepped out to the nurses’ station, where he got a call from Kristen. Brady shared that John was awake, and Kristen told Brady that she had been arrested.

There’s a lot going on right now on Days of Our Lives, so stay tuned to the NBC soap! Here at CDL, you can count on all the latest soap spoilers and news, so keep us bookmarked so you don’t miss a thing – we’ve got you covered!