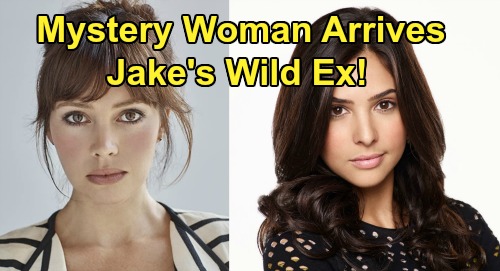 Days of Our Lives (DOOL) spoilers tease a new character is set to debut on the NBC soap, but the show’s staying tight-lipped on who she is and why she’ll head to Salem. Emily O’Brien will make her first appearance in this mystery role around late June, so here’s what we know so far.

O’Brien will be playing someone brand-new to Salem. In other words, don’t expect this to be a Sarah Horton (Linsey Godfrey) situation where DOOL takes an existing character and recasts. O’Brien will play a character that Days fans have never met before, so keep that in mind.

Since this character coming on the scene as a nobody to start with, what’s with all the secrecy? It’s weird that nothing has ever been released about this chick. The only reason anyone even found out about O’Brien’s role was through her inclusion in DOOL’s 54th anniversary cast photo.

O’Brien popped up in the picture, so that led to some investigating and Jason47’s confirmation on the actress joining the cast. Of course, the fact that O’Brien made it into the pic could be a clue, too. Since O’Brien was important enough to be included, it suggests her role is fairly substantial.

This character will be more significant than say Jeanne Marie (Christine Kellog Darin) in Paris or some random part for couple episodes. We’re probably looking at someone who’ll stick around for weeks or months.

Here’s what else we know about O’Brien. She’s a three-time Daytime Emmy nominee and played the part of Jana Hawkes on The Young and the Restless from 2006-2011. O’Brien is from England and is 34 years old, so those are potential hints as well.

It’s worth noting that O’Brien’s character on Y&R was indeed British. Jana was a pretty shady gal who resorted to murder, theft, kidnapping, assault, etc. Soaps often look at work on other soaps as part of the casting process, so perhaps O’Brien’s Days character could be a bit of a bad girl.

Let’s consider what DOOL’s hottest storyline is right now. Jake Lambert (Brandon Barash) recently surfaced as a dead ringer for Stefan DiMera (Brandon Barash). It’s possible Jake is Stefan pretending to be someone else – just like Gabi DiMera (Camila Banus) believes. However, what if Jake’s telling the truth?

Jake did some Stefan and Gabi research online. During the week of May 11-15, Days of Our Lives spoilers say Kate Roberts (Lauren Koslow) will also have a chat with Jake. Kate will give Jake the scoop on Stefan, so he’ll know pretty much everything he needs to know after that conversation.

Jake also looked a tad mischievous when he was gazing at Gabi’s photo. We should point out that O’Brien happens to favor Camila Banus somewhat. Jake has talked about his wild ex, who drove him crazy. She was the kind of woman who stays in a guy’s system.

Jake talked about not knowing whether to kiss her or strangle her, but he was clearly in love and things were serious. Many viewers assumed Jake was secretly Stefan talking about Gabi, but what if that’s not the case?

Based on the goons at the garage, Jake seems to owe money. It’d be easy for Jake to eventually claim he’s Stefan and reap the benefits of Stefan’s life. Jake could pay off the baddies and get a wife that reminds him of his old girlfriend – both in looks and personality.

That plan would hit a huge snag if Jake’s actual ex showed up in Salem. Could O’Brien’s mystery woman be the same woman Jake talked about? If so, this could lead to a fun battle between O’Brien’s character and Gabi. “He’s MY man!” “No, he’s mine!” You can see the potential for things to get very messy for Jake! That’d certainly explain the secrecy since Days would want to preserve this surprise.