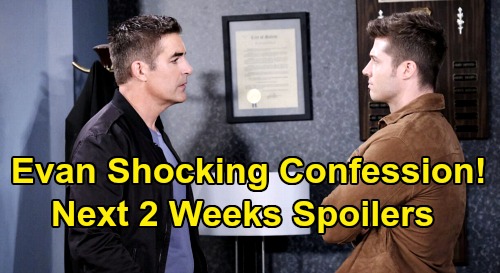 Days of Our Lives (DOOL) spoilers for the next two weeks tease that we’ll see some heartfelt moments as well as some devastating ones. During the week of February 24-28, Valerie Grant (Vanessa Williams) and Julie Williams (Susan Seaforth Hayes) will try to ensure Eli Grant’s (Lamon Archey) happiness. They’ll give Eli a nudge back in Lani Price’s (Sal Stowers) direction – and the plan will work.

Eli will finally decide he forgives Lani and is ready to move forward with her. He’ll appreciate what Lani did to save Julie and will be hopeful about their future together. Meanwhile, Gabi Hernandez (Camila Banus) will demand a new plea deal. She’ll infuriate Sarah Horton (Linsey Godfrey) and Eric Brady (Greg Vaughan) by refusing to save Mackenzie “Mickey” Horton unless they can guarantee her freedom.

The DA will be unwilling to cooperate when Eric makes his pitch, but he won’t stop fighting. Gabi is Mickey’s only match and could her last hope at survival. No matter how this plays out, Gabi will walk out of that police station soon enough. However, her freedom doesn’t mean she’ll avoid consequences. Gabi will get fired from DiMera Enterprises, which Chad DiMera (Billy Flynn) will happily gloat about.

During the week of March 2-6, Evan will make a stunning confession to Sonny. He’ll reveal his big secret, which is most likely that he’s David’s biological father. Did Evan kill Jordan as well? Regardless, Ciara and Will Horton (Chandler Massey) will play crucial roles as the end draws near for Ben.

Days spoilers say Ben will reflect on special moments in his relationship with Ciara as his lethal injection begins. He’ll ultimately flatline, but Ben won’t stay dead. DOOL viewer can expect Ben to be revived, so that’s good news for “Cin” fans!

Over with Jennifer Deveraux (Melissa Reeves), she’ll have a major faceoff with Princess Gina Von Amberg aka Hope Brady (Kristian Alfonso). Jennifer will undoubtedly rip into Princess Gina for nearly killing her, but could the real Hope inch closer to the surface, too? We’ll see if Jenn can make any progress during this showdown.

Next, Days of Our Lives spoilers say Nicole Walker (Arianne Zucker) will overhear something suspicious. She’ll figure out that Xander shares a secret with Dr. Raynor (Victoria Platt), the doctor paid off during the baby switch aftermath. Nicole could be on the verge of uncovering Mickey’s true identity!

Back with Gabi, she’ll have a heated confrontation with Kristen DiMera (Stacy Haiduk). Some harsh words will be exchanged – especially on Kristen’s end! It sounds like some fantastic Days scenes are ahead. Check back for all the latest DOOL updates and news. CDL will have the hottest Days of Our Lives spoilers as more details come out.