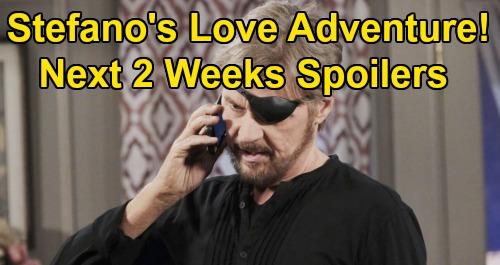 Days of Our Lives (DOOL) spoilers for the next weeks tease that some shocking confrontations are on the way. During the week of January 6-10, “Steve Johnson” aka Stefano DiMera (Stephen Nichols) will get into a heated argument with Jack Deveraux (Matthew Ashford). Jack will blast “Steve” for skipping Adrienne Kiriakis’ (Judi Evans) funeral and signing Kayla Brady’s (Mary Beth Evans) divorce papers without even caring.

“Steve” will insist that it’s all good since Kayla moved on, but Jack won’t think that matters. The point is “Steve” hurt Kayla, so Jack won’t be able to let this go. Of course, he won’t realize “Steve” is Stefano at the moment, but Kristen DiMera (Stacy Haiduk) should soon. She’ll get a stunning visitor and later, Stefano will put her loyalty to the test.

It sounds like Stefano won’t quite trust Kristen since she’s been a bit of a wildcard lately. One minute she’s planning to spend the rest of her life in a convent and the next she’s trying to tear Nicole Walker’s (Arianne Zucker) hair out! Stefano needs to be sure he can rely on Kristen, so he’ll try to figure out if that’s true.

Other Days of Our Lives spoilers say Victor Kiriakis’ (John Aniston) stroke will send him to the hospital. Since it’ll happen in the middle of a shouting match with Ciara Brady (Victoria Konefal), Xander Kiriakis (Paul Telfer) will play the blame game. He’ll think it’ll be Ciara’s fault if Victor dies.

Thankfully, Victor will pull through and ultimately hear Justin Kiriakis’ (Wally Kurth) plea. Justin will beg Victor to do the right thing and not let Ben Weston (Robert Scott Wilson) go down for murder. He’ll think Victor has the power to clear all this up – and maybe he does.

However, that would be due to pulled strings, not because Victor and Xander framed Ben. It’s Will Horton (Chandler Massey) who was their victim. Even so, Victor will consider his next move carefully and may end up trying to help Ben for Ciara’s sake.

Meanwhile, Kristen will manipulate Gabi Hernandez (Camila Banus) as she works to get what she wants. Gabi will have to do some manipulating as well thanks to Eli Grant’s (Lamon Archey) curiosity. She’ll hide her trail and hope Eli doesn’t fine out why Lani Price (Sal Stowers) hates her so much.

During the week of January 13-17, Rafe Hernandez (Galen Gering) will make a crucial phone call. He’ll likely summon Shawn Brady (Brandon Beemer) to help him crack a case – the case of why “Hope Brady” aka Princess Gina Von Amberg (Kristian Alfonso) is acting so bizarre!

As for Princess Gina, she’ll have a new scheme that she believes will help her win over John Black (Drake Hogestyn). Naturally, DOOL spoilers say Princess Gina won’t forget Steffy! She’ll think this plot of hers could help Stefano win Marlena Evans’ (Deidre Hall) heart, too.

Back with Gabi, she’ll be shocked by Eli’s sudden marriage proposal. As Eli deals with old feelings for Lani, he’ll respond by shoving those feelings down and asking Gabi to tie the knot. Next, Ben will get some comfort from Will. It looks like Ben’s failed appeal will leave him needing his prison pal’s support.

Other Days of Our Livers spoilers say Ciara will discover a major secret. She may learn that Xander and Victor were behind Will’s setup instead of Ben’s. They framed Will after Maggie Kiriakis (Suzanne Rogers) accidentally killed Adrienne Kiriakis (Judi Evans), so that’ll cause serious drama eventually.