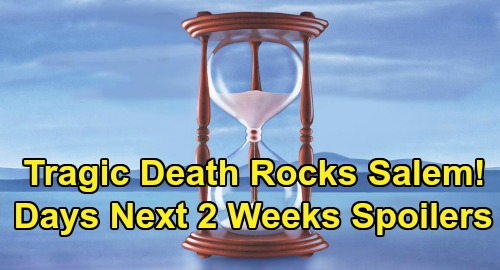 Days of Our Lives (DOOL) spoilers for the next two weeks tease that the excitement’s about to rev up in Salem. During the week of February 10-14, Stefano DiMera aka “Steve Johnson” will get shot in a struggle over a gun. He’ll flee after a faceoff with Chad DiMera (Billy Flynn), who’ll get stuck in Princess Gina Von Amberg aka “Hope Brady’s” lair.

“Steve” will seek help from Kayla Brady (Mary Beth Evans), but she’ll be torn about whether to give it. However, Kayla truly believes this man is Steve – the great love of life. As mad as Kayla is at him, she’d do anything to protect him.

After removing the bullet and smuggling “Steve” out of the hospital, Kayla will care for him as they stay at a secret hideout.

Days of Our Lives spoilers say Stefano will hit a snag when he can’t remember something significant. He’ll get a “Stayla” memory wrong, so Kayla will find that peculiar. She also won’t like the fact that “Steve” wants her to keep Justin Kiriakis (Wally Kurth) in the dark, but she’ll go along with that plan for now.

After Ben Weston’s (Robert Scott Wilson) wounded during his prison escape, he’ll find Ciara Brady (Victoria Konefal) waiting for him. Clyde Weston (James Read) will be captured, but Ben will hope to keep his chances of survival intact.

To do that Ben has to avoid the cops and rely on Ciara to help. Ben won’t want Ciara putting her own freedom on the line by aiding a fugitive, but she’ll insist.

Across town, Gabi Hernandez’s (Camila Banus) wedding to Eli Grant (Lamon Archey) will kick off – but not before Gabi makes some risky maneuvers! She’ll hope Julie Williams’ (Susah Seaforth Hayes) new pacemaker is linked up to her app, but DOOL fans will see how that goes. Regardless, Lani will crash the nuptials and leave all the guests wondering what her next move will be.

During the week of February 17-21, Julie will face a health crisis – or so it seems. She’ll collapse, but there’s a chance it’ll be part of the plan. Whatever the case, Days of Our Lives spoilers say Gabi will blurt out a confession, which will set up Rafe Hernandez (Galen Gering) arresting her. Poor Rafe will have to take his own sister into custody!

Other Days spoilers say the Horton family will face a tough loss. Jennifer Horton (Melissa Reeves) will be heartbroken over a death in the family, so that’ll probably be her father.

Bill Horton was heavily involved in Doug Williams’ (Bill Hayes) entrance to Salem, so he’ll likely be the shocking death that’s ahead for Hayes’ 50th anniversary show. This should give Doug a reason to look back.

Meanwhile, Kristen DiMera (Stacy Haiduk) will be perplexed and rattled over a dream about her baby girl. Rachel Isabella DiMera Black will visit her in this dream and leave Kristen wondering what it all means. If Brady Black (Eric Marsolf) notices Kristen seems uneasy, he may have questions about what’s going on.

As for Sarah Horton (Linsey Godfrey), she’ll get some positive updates regarding Mackenzie “Mickey” Horton. Later, Sarah will be floored when she finds out who the bone marrow donor match is. It’s safe to say Eric Brady (Greg Vaughan) is in for a surprise as well.

Finally, Will Horton (Chandler Massey) will grill Maggie Kiriakis (Suzanne Rogers) about the night of the crash. He may try to jog Maggie’s memory a bit so he doesn’t have to drop the bomb. Maggie’s the one who killed Adrienne Kiriakis (Judi Evans), but Will hates to be the one who hurts Maggie with the truth.

The next two weeks should bring some hot drama, so stay tuned. We’ll keep you posted as other Days news comes in. Stay tuned to DOOL and don’t forget to check CDL often for the latest Days of Our Lives spoilers, updates and news.