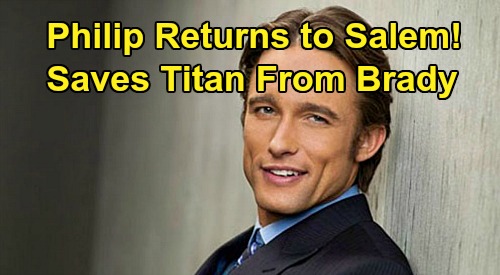 If Brady starts making questionable decisions at Titan, Victor may have some concerns. However, Brady can keep playing the “you helped steal my baby” card. He may remind Victor that he owes him total control of the company. Brady just needs to keep Victor in the dark long enough to complete his destruction plans.

What happens if Brady succeeds in tanking Titan? It’s doubtful Victor will just throw in the towel. That’s not really Victor’s style! Soap companies certainly go through dark periods like this from time to time, but that just brings the opportunity to rise from the ashes.

With a new leader, Titan Industries could rebuild after Brady destroys it.

Of course, Chloe Lane (Nadia Bjorlin) is confirmed to be returning down the road. There’s been strong buzz about Philip Kiriakis (Jay Kenneth Johnson) returning as well.

Although things could fall through or change due to the pandemic, it certainly looks like Philip’s set to make a DOOL comeback. It makes sense considering this Titan destruction story that’s about to play out with Brady.

Once Brady’s work is done, Philip could return home to pick up the shattered pieces of Titan. He might step up for Victor in the aftermath and help turn Titan’s luck around. Naturally, Philip could also reconnect with his loved ones in Salem. That includes Chloe since many Days fans would love to see Philip and Chloe back together for a new storyline.

After Brady crushes Titan and makes Victor pay, do you think Philip should emerge as a replacement CEO? Could Philip steer this sinking ship in the right direction?

Days of Our Lives spoilers say Victor will need some help, so he could easily turn to his business-savvy son who’s been in the CEO spot before.