Days of Our Lives Spoilers: Rafe & Zoey Become Hot Couple – Run Away With David To Protect Child From Orpheus? 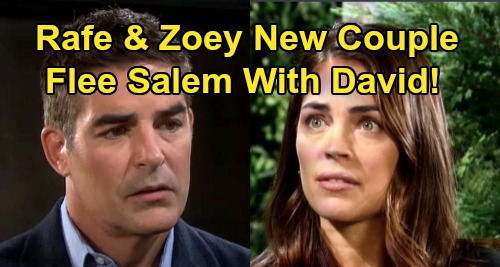 Days of Our Lives (DOOL) spoilers tease that Zoey Burge (Kelly Thiebaud) burst onto the DOOL scene in a big way recently, as the lawyer representing Evan Frears aka Christian Maddox (Brock Kelly). Zoey certainly came on strong, especially to Rafe Hernandez (Galen Gering), who doesn’t appreciate all of her efforts to strip him of custody of David Ridgeway (Caleb and Kyler Ends).

That’s led to a lot of tense moments for Zoey and Rafe, and things got even more tense when Zoey revealed that she was Evan’s sister and Orpheus’ (George DelHoyo) daughter, and that she was going to sue Rafe for custody of David.

Then, Zoey spun her theory of how she was going to argue that Rafe himself may have killed Jordan Ridgeway (Chrishell Stause), and that really got Rafe peeved.

Well, in the coming days, Rafe and Zoey will continue to be in each other’s orbits. On Friday, May 15th, Zoey will reveal Evan’s big secret to Rafe, and that could end up being a pivotal moment for the two characters.

Of course, at this point, it’s unclear why Zoey would disclose Evan and Orpheus’ secret to Rafe, but it could be a move that signals Zoe turning away from her family and actually trusting Rafe.

Then, during the week of May 18th, Orpheus will take matters into his own hands and kidnap David again. That will lead Zoey to plead with Rafe to trust her, which suggests that Rafe and Zoey may find themselves on the same side against Orpheus – or at least that’s what Zoey will want Rafe to believe.

Rafe might have a hard time trusting the person who wanted to take David away from him, but he might have no other choice given that David will be missing.

At any rate, later that week, Days of Our Lives spoilers say that Zoey will keep a secret from Rafe. What that secret could be is a mystery at this point, but it does show that Zoey and Rafe will be sharing more screen time together, and that leads us to wonder whether there are plans for the two characters to pair up.

One could imagine a scenario where Zoey and Rafe fall for each other, then leave together with David down the line. Stranger things have certainly happened on DOOL, so it wouldn’t be too odd for Rafe to make that sort of move, especially if it would allow him to raise David.

As you are probably aware, Galen Gering will be exiting DOOL this autumn, so we could see a scenario where Rafe and Zoey get together then decide to run off and disappear with David to jointly protect him from Orpheus. That would take a major turnaround on Zoey’s part, but it could certainly happen.

We’ll see what ultimately happens between Rafe and Zoey, but our little scenario would make sense from a storyline perspective and from the perspective that Rafe will be exiting canvas in a few months. Do you think Rafe and Zoey will run off with David in the end? Stay tuned to the NBC soap and keep CDL bookmarked for the latest Days of Our Lives spoilers and news.