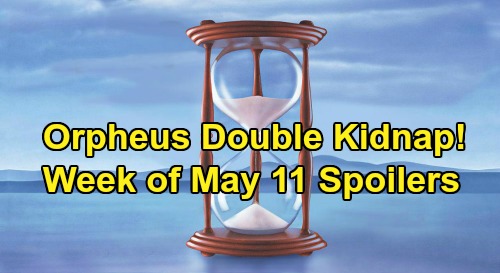 Days of Our Lives (DOOL) spoilers for the week of May 11-15 tease that some shocking showdowns are on the way. DOOL fans can expect Brady Black (Eric Martsolf) and Xander Kiriakis (Paul Telfer) to face off, which will lead to some thrown punches. Meanwhile, Sarah Horton (Linsey Godfrey) will hope she can finally disappear with Rachel DiMera Back – never to be seen or heard from again.

Of course, Kristen DiMera (Stacy Haiduk) will have a different idea in mind. She’ll stun Sarah by showing up and making a tearful plea for her child. Sarah will have some reservations about handing Rachel over due to Kristen’s shady history, but Kristen will promise to love and support her daughter. She’ll beg Sarah to believe that she can be a good mom, so Sarah will finally give Rachel back.

As for Brady, he’ll make an excruciating decision soon after. Days spoilers say Brady will approve Kristen’s escape with their daughter. Kristen and Rachel will disappear, so it looks like Brady will help them pull it off. Once Eric Brady’s (Greg Vaughan) brought up to speed, he’ll rage over Brady’s actions and confront him about letting Kristen flee with Rachel.

Back with Sarah, she’ll finally come face to face with Maggie. This will be their first meeting since finding out Maggie killed Sarah’s baby. Days of Our Lives spoilers say Maggie will offer an emotional apology, so we’ll see if Sarah can find it in her heart to accept it.

Other Days spoilers say Gabi DiMera (Camila Banus) will pay Dr. Wilhelm Rolf (William Utay) a visit and hope she can score the truth about her presumed dead husband. Gabi believes Jake Lambert (Brandon Barash) is actually Stefan DiMera (Brandon Barash), so she’ll try to figure out how that might be possible.

Later, Gabi will push Jake to let her help him with his memory, but he’ll reject her assistance. Jake will just want Gabi to leave him alone, but it doesn’t look like that’ll happen anytime soon! Over with Abigail DiMera (Kate Mansi), she’ll get physical with Kate Roberts (Lauren Koslow) after another hallucination strikes.

Abe Carver (James Reynolds) will come to Kate’s rescue, so that could tie in the romance that’s most likely brewing for these two. Abigail will make a return trip to the hospital, where her family will lift her up in her time of need. Unfortunately, Abigail’s set to disappear out of her hospital bed before May concludes.

In the meantime, let’s talk about Ben Weston’s (Robert Scott Wilson) incredibly romantic marriage proposal. Ciara Brady (Victoria Konefal) will be treated to a fun date night – one just like their very first date! After they munch on some Chinese food, the fortune cookie will pop the question for Ben. After Ciara says yes, Ben will slip an engagement ring on her finger and become the happiest man alive.

Next, Evan Frears aka Christian Maddox (Brock Kelly) will await news on his fate. Unfortunately, Orpheus (George DelHoyo) will be busy taking matters into his own hands – at least when it comes to David Ridgeway (Caleb and Kyler Ends)!

Finally, Days of Our Lives spoilers say Orpheus will drop a bomb on Marlena Evans (Deidre Hall). He’ll reveal that he’d abducted John and will only give him back for a price! As other updates become available, there’ll be other DOOL info to pass along.

DOOL spoilers say a great week’s in store for fans, so don’t miss all the drama. CDL’s where to be if you want the hottest Days of Our Lives spoilers, updates and news.