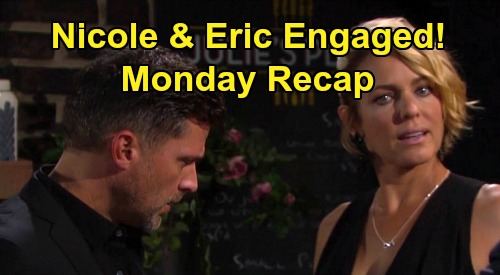 Days of Our Lives (DOOL) spoilers recap for Monday, May 25, reveal that Hope Brady (Kristian Alfonso) and Rafe Hernandez (Galen Gering) realized that Zoey Burge (Alyshia Ochse) must have been talking with Orpheus (George Del Hoyo) on the phone earlier. Together, Rafe and Hope took off after Zoey.

At Julie’s Place, Eric Brady (Greg Vaughan) gazed at an engagement ring in its box. Abe Carver (James Reynolds) came along and learned that Eric was planning to propose to Nicole Walker (Arianne Zucker) at dinner.

Abe was thrilled for Eric, and Eric asked Abe to perform the ceremony after Nicole said yes. Kate DiMera (Lauren Koslow) waltzed up and immediately said that Eric would be making a huge mistake by marrying Nicole.

Eric said it wasn’t Kate’s business, but Kate said it certainly was. Abe told Eric that he had recently hired Kate as his new Director of Communications. Abe took Kate aside and told her to apologize to Eric, which Kate sort of did but then proceeded to get another dig in against Nicole.

Eric told Kate to stop, and Nicole walked in to meet Eric for dinner. Nicole wondered what Eric and Kate were arguing about.

Kate made up some story, and Nicole learned that Abe had hired Kate. The ladies bickered a bit, then Abe and Kate went off to a table for a drink and a meeting. Nicole and Eric tried to forget about Kate and just focused on each other, ready to enjoy their evening.

At their table, Kate thought that Abe should have a press conference to update Salem about the Orpheus situation. She whipped out a speech all prepared for Abe, and Abe was impressed. Abe did, however, tell Kate to stop offering her opinions about other people’s lives. Kate agreed to try, but she still thought that Eric was making the worst mistake of his life.

Eric then got down on one knee and asked Nicole if she’d do him the honor of becoming his wife. Nicole was overcome with emotion and gasped, then told Eric that she would marry him. From their vantage point, Abe and Kate saw the scene, and Kate said, “There’s no turning back now – that guy is doomed,” while Abe looked askew.

Eric took the ring and put it on Nicole’s finger, and the couple kissed happily, then sat back down. Nicole said that they did it – they defied all odds and triumphed over every obstacle that life had thrown at them.

Eric said he remembered the first time he saw Nicole at the Java Cafe, 20 years ago. Nicole thought that she didn’t deserve all of this, but Eric disagreed, and the two declared their love for each other, then kissed.

Later, Abe and Kate stopped by Eric and Nicole’s table. Abe congratulated Eric and Nicole, while Kate said, “What he said.” The quad discussed how Abe would perform the ceremony, and Nicole said that their wedding couldn’t come quick enough for her. Kate snarked about wanting to lock down the marriage fast, and Abe whisked Kate back to their table.

Next, at the hospital, Justin Kiriakis (Wally Kurth) insisted that he go with Steve Johnson (Stephen Nichols) and Marlena Evans (Deidre Hall) to meet Orpheus, but Steve and Kayla Brady (Mary Beth Evans) talked him out of it. Steve promised Justin that he wouldn’t let Orpheus walk. Marlena and Steve took off.

Justin was antsy, but Kayla told him that he did the right thing. Justin went off to get himself and Kayla some tea, and Kayla flashed back to the old days during a time when a much younger Orpheus held her and Steve at gunpoint and Steve overpowered Orpheus.

Kayla mused to herself that Steve has always been her hero. Justin returned with their tea and hoped that everything was going ok with the rescue.

Over at the warehouse, Orpheus told John Black (Drake Hogestyn) that it was time for their field trip. John asked what Orpheus had in store, but Orpheus played coy and told “John Boy” that he he had nothing to worry about, and that he wouldn’t spoil all the fun.

Later, Zoey entered the warehouse after typing a code on a keypad. Rafe and Hope came along just after, and they determined that they needed to find a way into the warehouse. Rafe called an IT guy back at the station for help with the keypad.

Back inside the warehouse, John and Orpheus bickered, with John trying to get Orpheus to leave Salem with his $15M and leave David Ridgeway (Kyler Ends) with Rafe. Orpheus thought that sounded absurd, and he said he was going to be a family with David. Suddenly there was a knock on the door, and Orpheus said, “Perfect timing.”

Later, Zoey emerged from a back room, telling David that she’d be right back. Orpheus and John were now gone. Suddenly, Rafe and Hope burst in the warehouse, obviously having gotten through the keypad entry at the door. Rafe yelled for Zoey to freeze, but Zoey whipped out a gun and pointed it at Hope, then told Rafe to fork over his gun. Rafe complied, then he tried to get Zoey to turn on her father.

Rafe urged Zoey to work with them, and he’d get her son back. Zoey hesitated, saying that Orpheus is capable of horrible things. Hope said she understood that.

Rafe told Zoey that he wasn’t leaving the warehouse without David, and that they needed to work together. Rafe wanted Zoey to trust him, and Zoey looked completely confused about what to do.

Meanwhile, in the park, Steve and Marlena showed up, followed by Orpheus and John. Orpheus scoffed at Marlena about bringing Patch with her, but he said he’d let it slide this time. “We do this my way or John dies,” Orpheus said.

Steve told Orpheus that he had Marlena’s phone and that he’d electronically transfer his $15M. Steve did it, and Orpheus accepted the transfer on his phone.

Suddenly, Steve pressed some button on his phone, which sent an electric shock to Orpheus’ phone. Orpheus fell to the ground and was immediately rendered unconscious. Steve disarmed Orpheus, who remained unconscious, and John and Marlena kissed. Steve asked the lovebirds to help get Orpheus to the police station.

Later, at the police station, Marlena told Kayla via phone that they were all ok, and that Orpheus was behind bars. Steve and John approached, and Marlena said that Kayla and Justin were on their way down to the station.

John said that he just left Rafe a message, and that he had given the cops information on where to find David. John didn’t think that David was in immediate danger, since Zoey was watching him.

Kayla and Justin arrived, and Steve explained what had gone down and how he zapped Orpheus with the phone. Justin asked where Orpheus was now, and Steve said that he was in an interrogation room.

Justin wanted to see Orpheus, but Steve couldn’t authorize that. Justin took off, ostensibly to see the DA. Steve told Kayla that it took everything in him not to kill Orpheus on the spot.

Justin walked into the interrogation room where Orpheus was being held. “Do you know who I am?” Justin said. Orpheus replied that he was Victor Kiriakis’ (John Aniston) ineffectual nephew. “What the hell do you want?” Orpheus drawled. Justin whipped out a gun and said, “You killed my wife and I’m here to return the favor.” Justin pointed the gun at Orpheus.

Back at the warehouse, Zoey told Rafe and Hope that she had no idea where Orpheus was holding her son. Rafe tried to talk Zoey down, while Hope inched closer toward Zoey, eyeing Zoey’s gun. Rafe said that they would work together, and suddenly Hope rushed Zoey. Hope and Zoey fought over the gun, and the gun went off.

Back at Julie’s Place, Abe got notified on his phone that Orpheus had been apprehended. Kate said that they needed to get Abe in front of the cameras immediately to make sure that he got credit for it. And across the room, Nicole and Eric left to tell Marlena and John about their engagement. Kate said, “Oy,” as Nicole and Eric left happily.

Marlena said that Orpheus was in police custody and couldn’t get to them anymore. The camera then panned to a bomb that was silently ticking down on the coffee table.

That was a terrific episode of DOOL, and there’s much more excitement coming this week, so be sure to stay tuned to the NBC soap. Here at CDL, we’ll keep you up to speed on all the latest DOOL developments – we’re you’re place for the latest spoilers, daily recaps, and news, so stick with us!