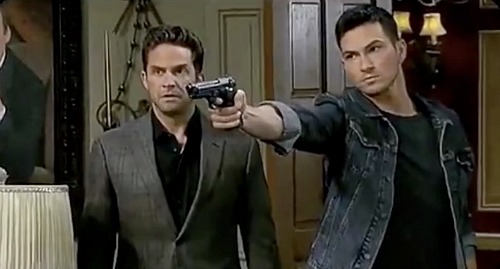 Days of Our Lives (DOOL) spoilers tease that fans are anxiously awaiting Brandon Barash’s return to the show. Brandon will be making his first appearance on Thursday, April 23rd when Gabi DiMera (Camila Banus) sees what she thinks is Stefan DiMera’s (Brandon Barash) reflection in a store window. And shortly thereafter, Ben Weston (Robert Scott Wilson) will bump into a guy who looks eerily like Stefan but introduces himself as “Jake.”

Fans are really hoping that Jake ends up being Stefan in the end, but all of that remains to be seen. But for now, everyone seems sufficiently happy to have Brandon Barash back on canvas in the coming days, whether or not the character is actually revealed to be Stefan down the line.

Of course, loads of “Stabi” fans are gearing up to see Jake on screen with Gabi, but we should point out that Stefan was one half of another popular pairing as well…we’re talking about the bromance between Stefan and Ben!

DOOL viewers will remember that Stefan was the only person in Salem who would give Ben a job, and Ben settled in nicely in his position as head of security at the DiMera mansion.

Stefan and Ben had some good heart-to-heart talks, and they seemed to really have each other’s backs. Well, recently Robert Scott Wilson, who portrays Ben, tweeted an homage to their on-screen friendship.

Robert posted a video montage showing a couple of great Stefan/Ben scenes in the DiMera mansion. Robert’s tweet reads: “Back on the block. #BashBrothers @nbcdays @BrandonBarash.”

Brandon promptly replied to the tweet, responding: “#BashBrothers be back!” And fans have been steadily replying to Robert’s tweet as well, expressing their enthusiasm in seeing the bromance rekindled. One person said: “EXCITED to see this friendship return.” And someone else replied: “Let’s get their friendship back.”

It should be great to see Ben react when he sees Jake for the first time. According to Days of Our Lives spoilers, the encounter will be pretty shocking for Ben, and he’ll subsequently have trouble wrapping his head around the fact that Jake is a doppelgänger for Stefan. It should be great viewing for DOOL fans!

Of course, one wonders whether Jake and Ben will be drawn to each other in the same way that Stefan and Ben formed their quick friendship. DOOL viewers will have to tune in to see! Are you looking forward to seeing Ben and “Jake” together on screen? Keep watching Days of Our Lives and consult CDL for all your soap news and spoilers.

Chapter 2 slaps even harder. And @McConaughey would make a beast of a Weston. Just sayin’. 🚬 @jimmyfallon @FallonTonight @nbcdays #days https://t.co/KUmnngKtst