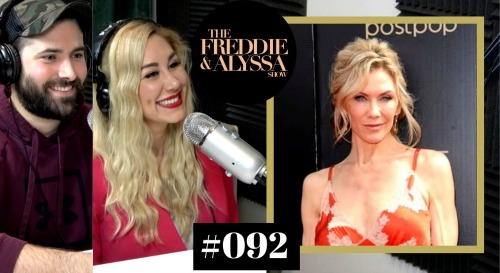 Days of Our Lives (DOOL) spoilers reveal that Stacy Haiduk (Kristen DiMera) recently had a lot to say about soap operas and the challenges of taking on two characters. DOOL fans know Haiduk also plays the always entertaining Susan Banks, who pops up from time to time in Salem. Susan is certainly a very different role than Kristen, so that presents some interesting obstacles.

Freddie Smith (Sonny Kiriakis) and his wife recently had Haiduk as a special guest on The Freddie & Alyssa Show. Haiduk was interviewed via Zoom, which thrilled Smith.

Since Smith and Haiduk didn’t have a chance to work together in scenes very often, Smith was eager to really talk and connect. He admitted he’s drawn to people with a positive spirit – and Haiduk is definitely one of those people.

Haiduk was just as eager to chat, so this discussion brought some interesting topics. One of those topics was the unique nature of soaps. Daytime television offers some great storytelling opportunities that you just don’t get in primetime.

Since soaps typically offer a new episode every weekday, they can dive in deeper. Days of Our Lives writers have so much more airtime to fill.

“It goes so far…it takes you on this journey ‘cause in nighttime you get like little snippets of stuff…like once a week, you only get to do so much,” Haiduk said. The Days actress has a good grip on the appeal of soaps and how fun they are for fans.

Haiduk was also asked how long it takes for her Susan transformation, which she admitted is actually pretty easy. The wig and fake teeth do most of the work! Haiduk only ran into trouble when she had to go from filming as Susan to filming as Kristen in a short amount of time.

“The biggest problem for me was switching back and forth sometimes in a day,” Haiduk said. It was hard to change out her contacts quickly and make all the adjustments necessary to go from character to character.

Haiduk also touched on the changes she’s seen in the industry since she started. She talked about how there used to be the days of being a television actress or a movie actress – and everybody wanted to be a movie actress.

Haiduk suggested that now “you’ve got everybody doing everything” and “it’s changed so much.” She pointed out that reality shows were a real gamechanger for the industry as well.

Haiduk’s been in the industry for 35 years, so she’s seen tons of changes – some for the good and some for the bad. Since no one ever knows what the future holds, Haiduk always focuses on positivity.

“I love life!” Haiduk declared toward the end of the video. Even when bad things are happening in the world, Haiduk likes to concentrate on bright side.

Days of Our Lives spoilers say Haiduk has some fantastic performances coming up as Kristen in the coming weeks, so stay tuned. We’ll keep you posted on all the latest DOOL updates and news. Would you like to see Haiduk play Susan again? Do you enjoy her version of Kristen? CDL’s your go-to source for sizzling Days of Our Lives spoilers, news and updates.