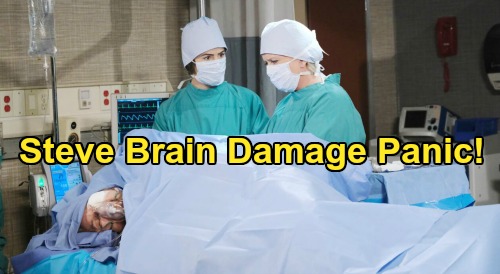 Days of Our Lives (DOOL) spoilers tease that Dr. Wilhelm Rolf (William Utay) will stay loyal to “Stefano DiMera” (Stephen Nichols). Dr. Rolf will battle guilt over Marlena Evans’ (Deidre Hall) microchip removal and the dream that’s dying. Stefano desperately wanted a future with his “Queen of the Night,” but that’s just not going to happen.

Dr. Rolf will hate that he couldn’t give Stefano the fully transformed queen he wanted, so he’ll hope he can make it up to him – at least in some small way. As a result, Days spoilers say Dr. Rolf will refuse to have any part in Stefano’s upcoming surgery.

Dr. Rolf was brought in as the only one who could pull it off without risking brain damage or death.

Since Dr. Rolf was backed into a corner, he’ll indeed make sure Marlena’s chip-free and her true self again. When it comes to Stefano, however, Kayla will be out of luck. Naturally, that’s not going to work for Kayla.

She can’t know for sure what her romantic future will look like if Steve Johnson comes back, but she’ll indeed know he has to come back – if only for his friends and family’s sake.

Days of Our Lives spoilers say Kayla will have no choice but to do the procedure herself. Sarah Horton (Linsey Godfrey) will be there to assist Kayla, but Steve’s fate will ultimately be in Kayla’s hands.

Kayla will have to determine if she’s willing to risk damaging Steve’s brain for the sake of making him Steve again. It sounds like there’ll be a chance Steve may not wake up at all. That’d be tough for Kayla to accept, but she’ll also realize Steve wouldn’t want to remain Stefano.

Steve would rather be dead than living as this villain who’s always going to wreak havoc on the people he loves. In the end, Kayla will handle the complication accordingly and hope for the best.

It’ll take some time for Steve to recall his love for Kayla, but he’ll face a romantic Days memory flood sooner or later. Of course, the next step will be getting filled in on all the chaos! A lot’s happened since Stefano took over Steve’s mind and body, so he’s sure to be overwhelmed once he gets updates.