Days of Our Lives Spoilers: Steve’s Post-Surgery Shocker – Feels No Love For Kayla 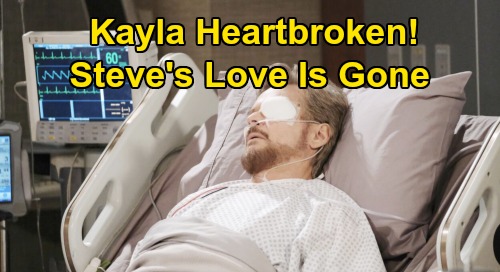 Days of Our Lives (DOOL) spoilers tease that Stefano DiMera aka Steve Johnson (Stephen Nichols) will soon be in for some bad news. Stefano probably saw the writing on the wall when he was captured after his “wedding” to Marlena Evans (Deidre Hall), and so he knows that the plan will be to remove the microchip and return him back to Steve. Stefano won’t like it one bit, but there won’t be much he can do about it.

Instead, it looks like Stefano will look ahead to longer-range plans and resign himself to being out of Steve’s body and into someone else’s body later in time. According to DOOL spoilers, Stefano will gather his available children together and bid them farewell, but he’ll eerily tell them that he will be back someday.

And from there, Stefano will be whisked into surgery, where Kayla Brady (Mary Beth Evans) and Sarah Horton (Linsey Godfrey) will set out to remove the microchip and turn Stefano back into Steve.

Days of Our Lives spoilers say that there will be some complications during the surgery, along with some tense moments where Kayla won’t know if she can safely remove the microchip without causing brain damage to Steve.

But Kayla will be determined to get that microchip out and return Steve to being Steve. Ultimately, Kayla and Sarah will be successful, and then all Kayla will be able to do is wait and see what happens when Steve wakes up.

Given that most of Dr. Wilhelm Rolf’s (William Utay) procedures are experimental and unpredictable, you never know what’s going to happen.

Well, the good news here is that Steve will indeed wake up from surgery and he’ll clearly be Steve. That will be great news for everyone involved, but it will soon become clear that there’s glitch in Steve’s brain.

According to DOOL spoilers, Steve won’t remember his love for Kayla, and that will be a huge development. Steve and Kayla are a DOOL super couple, and their love story spans decades, so for Steve not to remember that love will be significant.

Of course, this should be a devastating development for Kayla, who will probably be wondering whether Steve’s big memory loss will be permanent. Kayla’s in a very odd position right now, since she’s in a relationship with Justin Kiriakis (Wally Kurth), yet she surely wants Steve to return to be the man he was before he was captured by Stefano and forced into becoming the Phoenix.

Well, ongoing Days of Our Lives spoilers indicate that eventually Steve will remember his love for Kayla, but it won’t happen for a while, and during the interim Kayla will probably be wondering whether Steve’s memories of their love will ever return. It should be a rocky time for everyone involved as Steve is back but doesn’t want Kayla.

Of course, this will probably result in Kayla deciding to stick with Justin for the time being. But when Steve’s memories of his love for Kayla do eventually return, watch out – he’ll probably fight to get his Sweetness back! Keep watching the NBC soap, and remember to consult CDL for all the hot Days of Our Lives spoilers and updates. We’ll keep you updated on the latest DOOL news as it comes in!