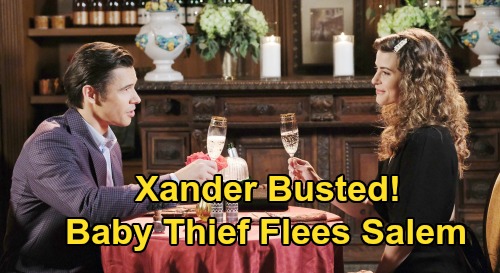 Days of Our Lives (DOOL) spoilers tease that Xander Kiriakis (Paul Telfer) will soon face some major challenges. As DOOL viewers know, he and Victor Kiriakis (John Aniston) were behind the baby swap in the hospital nursery that occurred after Sarah Horton’s (Linsey Godfrey) daughter suffered a seizure and died. Victor and Xander switched out Sarah’s deceased baby with Kristen DiMera’s (Stacy Haiduk) daughter.

Well, despite Xander and Victor’s best efforts to keep the baby swap a secret from everyone in their lives, DOOL spoilers say that the truth is going to come out in a big way.

Nicole Walker (Arianne Zucker) recently learned the truth from Dr. Amanda Raynor (Victoria Platt), who was complicit in the baby swap along with Victor and Xander.

Now, Nicole will head back to Salem, where she’ll quickly disclose the terrible truth to Eric Brady (Greg Vaughan). Eric will be devastated to learn that his daughter is the one who didn’t survive that night in the nursery, but after a short period of grief, it looks like his feelings will morph into intense anger toward Xander.

Sure, Eric will probably be upset at Victor, too, but it looks like Xander will get the bulk of Eric’s rage. As DOOL viewers know, Eric has never liked Sarah being in a relationship with Xander, and he just knew that Xander was no good. Yet it will give him no pleasure to have to tell Sarah that their baby died, and that Xander switched the babies on purpose.

Well, from here, it looks like everything is going to unravel for Xander. Exactly what Sarah’s next move will be remains to be seen, but Eric is going to totally attack Xander, punching him square in the face. And when everything is said and done, Xander is going to have no one to turn to for support…except maybe Victor.

In one fell swoop, Xander will have loads of people angry with him – he’ll have Sarah, Eric, Kristen, and Brady Black (Eric Martsolf) furious with him, and that doesn’t even address all the legal woes he’s going to almost certainly face.

Xander and Victor conspired to what will probably be considered kidnapping, plus they bought off and physically threatened Dr. Raynor.

One wonders if Xander will even stick around Salem after the baby swap truth comes out. Xander could decide to go on the run and hide out somewhere to avoid being on the hook for his crimes. It would absolutely kill Xander to be away from Sarah, but then again, she’ll probably want nothing to do with him after it all goes down.

We’ll see what happens here, but we wouldn’t be surprised if Xander tries to get out of Dodge and leave the whole baby swap aftermath in his wake. Do you think Xander will flee Salem when the truth comes out?

Remember that CDL is your go-to place for the latest soap news and updates! Keep watching Days of Our Lives, and we’ll keep you updated on the hottest DOOL spoilers and news as they come in.