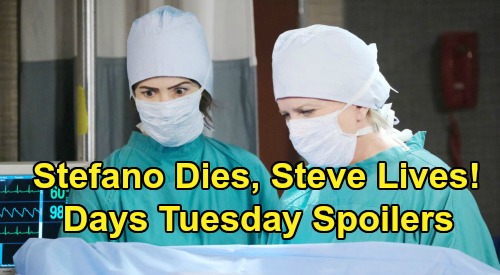 Days of Our Lives (DOOL) spoilers for Tuesday, April 7, tease that Eric Brady (Greg Vaughan) will have a big decision to make. DOOL fans know Nicole Walker (Arianne Zucker) just revealed the truth about Mackenzie “Mickey” Horton, so now Eric has to figure out what he’s going to do. Nicole pointed out that no one else ever has to know, but Eric’s hesitant to keep this secret from Mickey’s bio parents.

That’s especially true since Mickey’s bio parents just showed up! Brady Black (Eric Martsolf) and Kristen DiMera (Stacy Haiduk) are right outside the door, so the pressure’s on.

After Eric lets Kristen and Brady in, he’ll determine that he has to confess the baby swap story – but not yet. Days spoilers say Eric will hold off on his admission since he really needs to break the news to Sarah Horton (Linsey Godfrey) first.

It sounds like Eric will just have to pretend everything’s fine until he can drop this bomb on Sarah. Although Eric doesn’t want to lose Mickey, he just couldn’t live with himself if he kept quiet.

In the meantime, Kayla Brady (Mary Beth Evans) will make a big decision of her own. Kayla’s in a tight spot since Stefano DiMera (Stephen Nichols) needs a risky procedure to become Steve Johnson again.

Dr. Wilhelm Rolf (William Utay) is refusing to perform Stefano’s surgery, so Kayla will have no choice but to do it herself. Of course, Kayla will understand this is awfully dangerous. Dr. Rolf is the only one qualified to take out Stefano’s microchip, but Kayla can’t just let Steve’s mind and body be held hostage.

Steve would rather die than remain under Stefano’s control, so that’ll be a huge factor in Kayla’s decision. She knows Steve well enough to realize this is what he would want. Steve has always been a risktaker, so Kayla will prepare for this bold move and hope for the best.

Days of Our Lives spoilers say Stefano will ultimately have to surrender. This procedure’s happening whether Stefano likes it or not, so he’ll shift gears and focus on making peace with his “death.” As part of that plan, Stefano will deliver one final wish. He’ll just want to see his children and give them an emotional goodbye message.

Kristen will be summoned to Stefano’s room along with Tony DiMera (Thaao Penghlis) and Chad DiMera (Billy Flynn). As the end draws near, Days of Our Lives spoilers say Anna DiMera (Leann Hunley) and Abigail DiMera (Kate Mansi) will battle concerns.

They’ll worry about Tony and Chad, who certainly have complicated relationships with their father. Watching Stefano “die” will be tough no matter what!

As other Days updates become available, we’ll pass along all the details. It looks like Stefano’s transformation will shake things up for several Salemites, so DOOL fans will want to stay tuned. Don’t forget to check back frequently for sizzling Days of Our Lives spoilers, news and updates.