Days of Our Lives Spoilers: The Real Jake Lambert Mystery Explained – Why Were Jake’s Memories Implanted In Stefan DiMera? 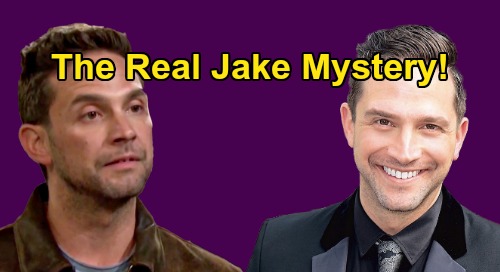 Days of Our Lives (DOOL) spoilers tease that Gabi Hernandez DiMera (Camila Banus) will hope to prove her suspicions about Jake Lambert (Brandon Barash). Gabi knows in her heart that Jake is Stefan DiMera (Brandon Barash) – and she could easily be right about that. After all, Gabi started “seeing” Stefan and feeling close to him again just before Jake appeared at the garage.

DOOL fans will recall Stefan and Gabi’s deep, undeniable connection. Since Gabi’s so convinced this is Stefan and Dr. Wilhelm Rolf (William Utay) hinted that someone may have brought Stefan back, all the signs are there.

If Jake is indeed Stefan, then that obviously stirs up some interesting questions about Jake. Let’s talk about some new clues as we work to unravel this Days mystery.

Gwen (Emily O’Brien) had no idea who Stefan was and was quite adamant that Jake couldn’t possibly be him. Although Gwen might’ve been lying, her reaction seemed genuine. Gwen suggested that although she’d only met Jake about a year and a half ago, he had told her stuff about his life before then.

Of course, Gwen also expressed surprise that Jake would be reading Crime and Punishment. She thought it was too “high-brow” for Jake before she realized this wasn’t a book he read; it was a book containing mob names and account numbers.

Stefan grew up in the United Kingdom and later lived all over the world. He was refined and appreciated the finer things, so his stories wouldn’t line up with Jake’s. If Gwen’s telling the truth, then Jake probably told stories about learning to fix bikes and getting his hands dirty. Stefan wouldn’t have the same sort of experiences.

However, John Black (Drake Hogestyn) pointed out that Stefan may have been given someone else’s memories. That could be the way this Days of Our Lives mystery’s swinging now. Who’s the real Jake Lambert and why were Jake’s memories implanted in Stefan?

It’s strange since Jake’s such an “average Joe” kind of character. There doesn’t seem to be anything noteworthy about Jake that’d make him important. Nevertheless, there has to be some reason if that’s the way it went down. Is the real Jake dead? Did Stefan actually survive and take his place?

If Gabi proves Jake is Stefan, then this storyline becomes a matter of figuring out why Stefan had to become Jake! We’ll deliver updates as other Days news emerges.