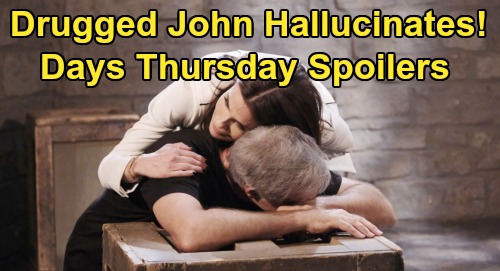 However, that does present a problem for Princess Gina, who wants John to lean on her and ultimately let go. Instead, John will try to escape from this dungeon they’re trapped in.

John will hope to dig his way out or pry open the bars on the window, so Princess Gina will grow frustrated. She’ll realize she needs to take things a step further, so she’ll drug John’s water and spark some hallucinations.

Days of Our Lives spoilers say John will struggle with delusions on Thursday. He’ll think Marlena’s there with him, which will lead to some confusion and a kiss with Princess Gina.

Of course, John’s love for Marlena won’t waver, so Princess Gina should end up more annoyed than ever by the end of all this.

Meanwhile, Roman Brady (Josh Taylor) and Rafe Hernandez (Galen Gering) will arrive in Prague, which is currently where John and Princess Gina are. Days spoilers say Rafe and Roman will be on a mission to find Princess Gina and Marlena, but they may run into some hurdles along the way.

They’re stuck in Princess Gina’s lair together, which is exactly the way Stefano wants it. “Steve” will work to convince “Marlena” that John is really gone and will pull her into a steamy smooch eventually.

This is all building to “Steve” revealing himself as Stefano by the end of the week, so we’ll see how long Hattie can keep up her end of the ruse. Over with Ciara Brady (Victoria Konefal), she’ll stumble across a lead that points her in the right direction.

For now, Ben will face some pressure at Statesville. Days of Our Lives spoilers say Clyde Weston (James Read) will push Ben to accept his help and go for his prison escape idea. Ben will ultimately decide the risk is worth it, so some shockers are coming up in the week ahead.

It sounds like some great drama’s brewing. We’ll give you updates as other Days news comes in. Stay tuned to DOOL and don’t forget to check CDL often for the latest Days of Our Lives spoilers, updates and news.