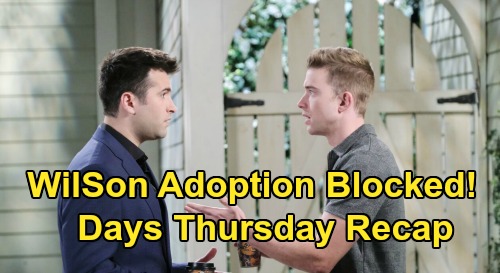 Days of Our Lives (DOOL) spoilers recap for Thursday, June 11, reveal that Eli Grant (Lamon Archey) and Lani Price (Sal Stowers) talked at their apartment. Lani was worried about not having morning sickness and wondered if it could be a sign of impending doom with the pregnancy. Eli tried to be reassuring, but Lani snapped at him then apologized for being “hormonal.”

Since it was their day off, Eli and Lani decided to do some wedding planning and settled on the 4th of July for their wedding. The couple flashed back to their first marriage proposal, which took place on the 4th two years ago, and Lani suggested that they start making lists.

Eli had something else in mind, and he got frisky with Lani, who mildly complained that they didn’t have time.

At the DiMera mansion, Lucas Horton (Brian Dattilo) asked Kate DiMera (Lauren Koslow) when Allie Horton (Lindsay Arnold) had arrived in Salem. Kate noted that Allie’s plane landed hours ago, and she wondered why Allie would come to Salem and not call her favorite relative…her.

At the Kiriakis mansion, Will Horton (Chandler Massey) and Sonny Kiriakis (Freddie Smith) worried about Gabi DiMera’s (Camila Banus) disappearance. Will called Abe Carver (James Reynolds), who said that it was still too early for a missing person’s report, but that he’d drop by Rafe Hernandez’s (Galen Gering) house and get him involved.

Soon, Will’s phone rang, and it was one of the adoption agencies they’d contacted. The agency said that there was an “issue” with their domestic situation that had to do with Will’s jail time.

Will and Sonny assumed that the real issue was that they’re gay, and Sonny was reassuring and said that they’d find another agency that was more cooperative. Suddenly Kate and Lucas walked in and Will was stunned to see his dad.

Lucas explained that they were trying to track down Allie, and that Allie had gotten into the party scene in London. Will suggested that perhaps Allie went to see Marlena Evans (Deidre Hall), but a quick phone call revealed that she wasn’t there.

Will wondered if they should call Sami Brady (Alison Sweeney), but Lucas said not yet. Lucas said there’s just one more place that Allie could be.

Later Will and Sonny sat alone and wondered if they were up for raising another child. Sonny suggested that they could be “one and done,” but Will said that he liked raising Ari Horton (Sydney Brower) with Sonny and that he wanted another kid. Will and Sonny embraced happily.

At Rafe’s place, Hope Brady (Kristian Alfonso) comforted Rafe, who was still in shock over losing custody of David Ridgeway (Kyler Ends). Hope offered to get David’s things packed up and send them to Zoey Burge (Alyshia Ochse) while Rafe took a shower.

Abe stopped by and talked with Hope and she shared that Rafe had lost custody of David. Abe decided not to burden Rafe with Gabi’s situation right now.

Abe and Hope talked briefly about Hope returning to the police force, which Hope didn’t want to do. Abe also gave his two cents about Hope and Steve Johnson (Stephen Nichols) getting the key to the city. Abe said that he initially opposed the idea, but that he had changed his mind and hoped that Hope and Steve would accept the honor.

Abe left and Rafe returned to the room. Hope suggested that they eat something, and she said she’d order a pizza. Rafe mentioned what David didn’t like on pizzas, then caught himself and it just drove home the point that David was now gone.

Rafe lamented that maybe he’s not meant to be a father, but Hope set him straight, saying that he’d find someone and have a family someday. Hope and Rafe decided to be friends going forward and shared a nice moment together.

Back at Eli and Lani’s apartment, they were about to make love when Abe dropped by on official business. First, Eli and Lani shared their July 4th wedding date, which thrilled Abe.

Talk turned back to the reason why Abe was there, and he shared off-screen about what was going on with Gabi. Lani assumed that Gabi had jumped her bail, but Abe said that Will and Sonny didn’t think that Gabi would leave Ari behind.

Eli asked why Abe didn’t go to Rafe about this, and Abe said that Rafe just lost custody of David. Lani was upset about that, and she and Eli subsequently agreed to look into Gabi’s disappearance. Abe put their wedding date into his phone, and he hugged Lani happily.

At Eric Brady (Greg Vaughan) and Nicole Walker’s (Arianne Zucker) apartment, Eric and Nicole were stunned to see that Allie was pregnant. Eric immediately got gruff and accusatory, alienating Allie. Nicole tried to intervene, but Eric grumped that their apartment wasn’t big enough, and Allie got miffed and threatened to leave.

Nicole stopped Allie from going, and she tried to get Eric to listen to Allie like he would listen to someone in need at the Horton Center. Allie didn’t respond to questions about her baby’s father, and she got defensive and mouthy when Eric asked anything that she didn’t want Sami to know.

While Allie was in the restroom, Nicole told Eric that he shouldn’t interrogate Allie. Allie returned to the room, and Eric apologized and hugged his niece. Allie asked that nobody tell Sami about her pregnancy, and Eric got a look of horror on his face.

Nicole interjected calmly that Sami was going to find out eventually, and Eric said that in a few months there would be a baby. “Not necessarily,” Allie said.

Eric asked Allie what she meant by that, and suddenly there was a knock on the door. Eric looked through the peephole and said, “It’s Kate.” Outside the door, Kate told Lucas that she heard voices coming from inside. Eric told Allie that both Kate and Lucas were outside the door. Allie looked horrified.

There’s definitely a lot going on right now on Days of Our Lives, so stay tuned! We’ll give you updates as DOOL news comes in. Stick with the NBC soap – here at CDL, we’ve got all your up-to-date Days of Our Lives spoilers, recaps, and news.