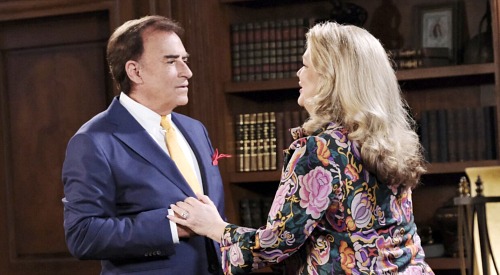 Days of Our Lives spoilers reveal Tony DiMera (Thaao Penghlis) and Anna DiMera (Leann Hunley) had a good storyline prior to the time jump. However, they were missing when the soap jumped ahead a year. Head writer Ron Carlivati said there was “no room” for the couple. However, he didn’t rule out future returns.

No Room For Tony DiMera and Anna DiMera

DOOL spoilers indicate that there was so much going on with multiple characters, that some Salemites were forgotten. In the latest issue of Soap Opera Digest, head writer Ron Carlivati explained why we haven’t seen Tony and Anna yet.

“With so much going on, what we realized is there really wasn’t room for Tony and Anna when we came back after the time jump.”

However, that doesn’t mean we won’t get a tiny slice of what led to their exit. During flashback week, viewers will get to see what caused the couple to leave town. Plus, it is teased that they affected a big storyline before their exit.

There are indications that the storyline Carlivati is referring to has to do with Gabi Hernandez (Camila Banus).

Days of Our Lives spoilers reveal that Gabi’s dialogue hinted at Tony and Anna’s exit. The character discussed the couple going back to Europe. It was implied that is how she ended up as CEO of DiMera Enterprises.

Since Gabi wasn’t exactly the top choice of the board, it will be interesting just how she wrangled and manipulated her way into getting the DiMera CEO position.

Will Thaao Penghlis and Leann Hunley Return in the Future?

Even though they are currently off the canvas, it is possible they will return in the future. The head writer said he loves legacy characters and though Tony and Anna aren’t in Salem right now, they aren’t really gone.

Carlivati also mentioned that he enjoys pulling out fan-favorite characters and bringing them back into play. Hopefully, we won’t have to wait too long before seeing Tony and Anna back in Salem.