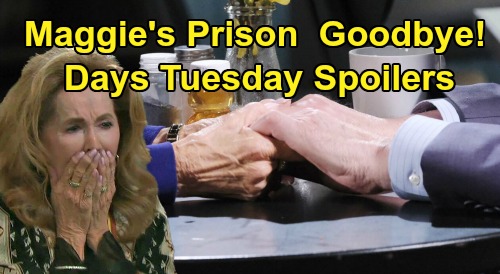 Days of Our Lives (DOOL) spoilers for Tuesday, March 24, tease that Ben Weston (Robert Scott Wilson) will finally score his release from prison. It’s been a long, hard fight to get here, but Ciara Brady (Victoria Konefal) never gave up hope. Once Ben leaves Statesville, he’ll join a thrilled Ciara and Justin Kiriakis (Wally Kurth) at the Salem PD. Ben will shake Justin’s hand and thank him for everything he did to help.

Afterward, Ben and Ciara will share plenty of lovey-dovey moments. They’ll kick off a new “Cin” chapter and look forward to whatever the future holds. Meanwhile, Days fans can expect some tough goodbyes for Maggie Kiriakis (Suzanne Rogers) and her loved ones. Maggie will bid farewell to Sarah Horton (Linsey Godfrey), Xander Kiriakis (Paul Telfer) and of course, Victor Kiriakis (John Aniston).

Victor may make one last plea to Maggie in Tuesday’s DOOL episode. If Maggie would just say the word, Victor could whisk her away to some private island and help her avoid punishment. However, Maggie will be adamant about serving her time. Days of Our Lives spoilers suggest that Maggie will stick to the plan and begin her stint in the slammer.

Over with Hope Brady (Kristian Alfonso), she’ll get updates on more of what she missed. Hope was dormant for almost a year and a half thanks to that Princess Gina Von Amberg microchip, so there’s certainly been a lot to catch up on. Although Kayla’s been hesitant to share too much at once, Days spoilers say she’ll offer up a few other details and try to give Hope the full picture.

Hope’s already heard how she tried to kill Jennifer Deveraux (Melissa Reeves) and got tangled up with Stefano DiMera aka Steve Johnson (Stephen Nichols). There’ll probably be more Stefano info to cover, but Hope also missed a lot of Salem happenings in general. Adrienne Kiriakis (Judi Evans) is dead and Ben was nearly executed, so Hope needs to hear some important stories soon enough.

Other Days of Our Lives spoilers say Nicole Walker (Arianne Zucker) will almost get busted. Just as Nicole’s about to pick up DNA test results from a lab technician, Eric Brady (Greg Vaughan) will appear. Nicole will manage to cover and keep Eric in the dark on her baby swap suspicions for now. Since Nicole doesn’t know anything for sure yet, she’ll just feel like that’s the right call.

Once Nicole ultimately opens those DNA test results, she’ll be in for a surprise. Thanks to Xander’s tampering, Kristen DiMera (Stacy Haiduk) won’t be a match for Mackenzie “Mickey” Horton. Even so, Nicole will remain convinced that Mickey and Rachel DiMera Black are the same kid. Xander will hope he’s ended Nicole’s pursuit of the truth, but Nicole just won’t be satisfied until she proves her hunch.

It sounds like some great drama’s ahead on the NBC soap. We’ll pass along all the latest DOOL news as it becomes available. Stick with CDL for the hottest Days of Our Lives spoilers, news and updates.