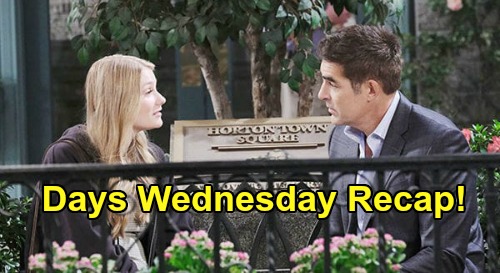 Days of Our Lives (DOOL) spoilers recap for Wednesday, June 24, reveal that Lucas Horton (Brian Dattilo) and Allie Horton (Lindsay Arnold) talked in town square. Lucas asked what Allie meant when she said she wouldn’t be raising the baby, and Allie said she was going to give the baby up for adoption. Lucas wanted Allie to sit and talk and really think about the decision, but Allie didn’t want to hear it.

Lucas offered to sit and have lunch or a sundae with Allie, but Allie didn’t want to be bought off with ice cream, saying that she just wanted to be alone. Lucas, nearly in tears, left.

Rafe Hernandez (Galen Gering) then came along and had a tender reunion with Allie. Rafe wondered why Allie was back in town, and she unzipped her hoodie, exposing her pregnant belly.

Allie and Rafe sat and talked, and Allie disclosed that she wanted to give her baby up for adoption. Rafe accepted it and he offered his support no matter what. Allie then learned that Rafe had lost custody of David Ridgeway (Kyler Ends), and she offered her condolences.

Rafe and Allie reminisced about old times and then Rafe’s phone beeped and it was time for him to get back to court for Gabi DiMera’s (Camila Banus) trial.

After Rafe left, Allie sat alone on the park bench and suddenly had an idea of a way that Rafe could help her. Meanwhile, over at the Kiriakis mansion, Will Horton (Chandler Massey) and Sonny Kiriakis (Freddie Smith) discussed the possibility of adopting Allie’s baby – perhaps it was the universe’s way of making a decision for them. Soon, Lucas walked in and overheard them Will and Sonny talking about Allie.

Sonny and Will told Lucas that they knew about Allie’s pregnancy, and Lucas asked them to help him convince Allie not to give her baby up for adoption. Will and Sonny were perplexed, saying that it was Allie’s decision, and that they were considering asking her if they could adopt her baby. Lucas looked askew.

Jack needled Steve about talking to Kayla about his real feelings, but Steve said he wasn’t going to do that.

Jack then revealed that Jennifer Deveraux (Melissa Reeves) knew about Steve’s feelings for Kayla, and Steve was peeved that Jack had told her. Jack said that Jennifer knew that it was Steve’s place to tell or not tell Kayla how he feels. Soon, Jack had to go back to court for Gabi’s trial, and Steve sighed unhappily.

A skeptical Eli asked Victor why he stabbed Kristen, and Victor said that he “wanted that succubus out of Brady’s life.” Brady Black (Eric Martsolf) looked nervous.

Ultimately, Eli told Victor and Brady that he’d be happy to take Victor’s recantation to the DA, but that if he did, then Brady would surely be re-arrested for the crime and Victor would be charged with perjury.

Eli said that he’d hold off on contacting the DA until he heard back from Victor and Brady. Eli left, and Victor and Brady decided that there was really nothing they could do to help Kristen, short of going to jail themselves.

At the Brady Pub, someone lurked outside and watched Lani as she sat at a table and looked over a menu. Kayla came along and joined Lani. The women talked about wedding plans, Gabi’s trial, and Lani’s pregnancy. Kayla revealed that her wedding would be July 10th, and during their conversation she flashed back to her first wedding to Steve.

Kayla left, and Eli came in to join Lani. Eli filled Lani in on Victor’s attempt to say that Kristen didn’t stab him, and then Lani cutely fed Eli some of her sundae with a side of pickles. Someone watched Lani and Eli from outside the pub.

Finally, Kayla walked through the park as she was distracted by her phone. She happened to bump into Steve. Steve and Kayla looked at each other awkwardly.

There’s definitely a lot going on right now on Days of Our Lives, so stay tuned! We’ll give you updates as DOOL news comes in. Stick with the NBC soap and be sure to keep CDL bookmarked so you don’t miss any of our Days of Our Lives spoilers, daily recaps, or hot news.